Now at the halfway point of the 2020 Pacific Tuna Tagging expedition, Giulia Anderson reports on their progress as they chase schools of tuna across the vast waters of Kiribati's EEZ and the Phoenix Islands Protected Area.

As an early career scientist, Giulia had only just landed her dream job with the Pacific Community (SPC) in New Caledonia, when she suddenly found herself on board a 7-week research expedition to monitor the health of world’s largest tuna fishery in the Western & Central Pacific.

The Gutsy Lady 4 and its mostly Hawaiian science crew departed from Honolulu on Saturday 15 August and the vessel will return directly to Honolulu on 05 October, without making any port calls, to avoid any potential for COVID-19 transmission to any Pacific communities.

The Gutsy Lady 4 and its crew have now travelled across 2700 nautical miles of blue ocean, from Hawaii through the vast exclusive economic zone of the Line Islands of Kiribati and the neighbouring high seas. Apart from the first few days of broadside waves that turned the GL4 into a gimbled funhouse attraction, we’ve had quite agreeable weather. Twice we’ve had calm enough waters to barbeque on deck for dinner.

Our exact path zigzags based on real-time information shared by the fishing sector about the locations where tuna numbers are expected to be high. The alternative is wandering the ocean looking for signs of free schools, which is comparable to looking for a needle in a haystack if the needle can also move and you can only search the top few inches of hay. Consequently, the cooperation of the fishing sector is invaluable.

So far, our efforts have been rewarded with 3000 fish tagged! We also recently released the 1000th  bigeye tuna with an electronic tag for the programme, adding to the now 15-year time-series of information that is needed for monitoring tuna ecology and ocean habitats. The tagging program has now tagged and released over 450,000 live tuna since 2006.

Electronic tags log data which describe a precise tracking of a fish’s diving behaviour, lateral movements, and surrounding water temperature. Deploying an electronic tag requires surgically implanting a 7cm capsule of electronics in a tuna that is at least 65 cm in length. From previous research voyages returned electronic tags have identified fish swimming thousands of miles, sometimes following a similar track repeatedly over seasons or years, only to be captured in roughly the same area as it was released. The data provided by archival tags can radically adjust our understanding of a species’ life history.

In contrast, a majority of the fish are conventionally tagged. Conventional tagging involves attaching a thin plastic tag that includes a unique code and instructions to anyone who later catches the fish to return the tag for a small reward. This type of tagging captures the size and location of a fish at time of tagging, and hopefully the details of its size and location when it is recaptured. Although the data per tag is limited, the volume of tags deployed still makes them informative.

Throughout the expedition we have been using two different fishing techniques known as dangling and jigging. Danglers are a great way to get a lot of conventional tags in the water quickly. The fishing style consists of coaxing a school of fish to the surface with chum and water sprayers that simulate the presence of prey. The vessel then dangles multiple lures with barbless hooks just at the surface of the water. As fish get caught on the lures, crew members haul them onboard and ferry them to an available tagging cradle. Most of the time, this method is deployed at daybreak and attracts smaller fish that are naturally near the surface. Once or twice we have dangled schools of much larger fish; it is a glorious kind of chaos when 12 fish at 80+ cm length are on the hook at the same time.

With jigging, individual fishers drop heavily weighted lures down between 20 and 60 fathoms (120 meters) or more using rod and reel. Jigging brings up one fish at a time and invests far more effort per tag than dangling. We usually undertake jigging during dark hours to catch larger fish that otherwise do not come near the surface. However, jigging is the option at any hour when fish refuse to come near enough to the surface to be tempted by dangler lures. Despite the reduced efficiency, jigging accounts for almost half of the fish tagged so far—a testament to the hard work and enthusiasm of the crew.

Jig handlining is a secondary fishing technique for catching big tunas at depths up to 30 fathoms. During jigging sessions, skilled crewmembers drop lures or baited hooks and pull fish back onboard with nothing but glove-protected hands. For all the fancy equipment available onboard, it is often the deftly handlined fish that are in best condition for archival tag surgery during jigging sessions.

With 25 more days to go, no one onboard shows signs of burning out. Sure, jigging at 2am requires a lot of coffee, but that’s what afternoon naps are for. Also—I’m sure everyone in the world would agree from experience—there is no better time of day for an anchovy/hose fight than 4am. Everyone onboard is dedicated to getting as many tags in the water as possible, with full appreciation for the importance of the data we generate. Sure our muscles are sore and bags under our eyes are getting deeper but that’s life on a working fishing boat doing science.

We hope the coming weeks will carry on the same trend of productivity (and fun!). 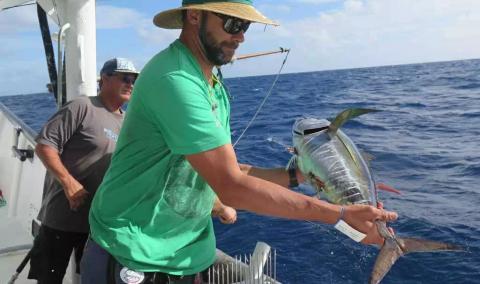 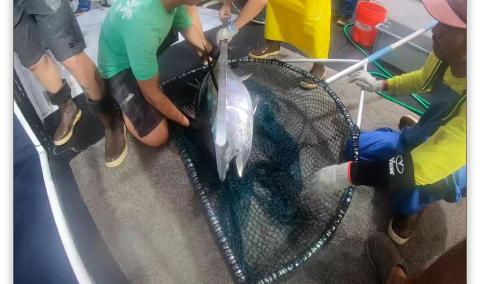 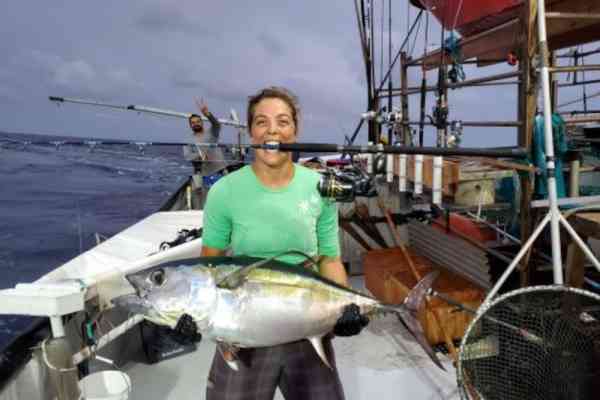