My name is Giulia, I’m a fish molecular geneticist, working at the Pacific Community and this is my second time onboard the Pacific tropical tuna tag cruise to monitor the health of the region’s stocks. Last year, I joined the team for the first time under the same conditions (COVID-19, quarantine, no port-call) and together, we tagged over six thousand tuna in the same waters.

It’s really a strange world right now:  after leaving Noumea (SPC Headquarters), passing through Tokyo and Guam and finally landing in Honolulu, I had to spend 10 days in quarantine in Honolulu. But now, here we go again! After all these endless days of preparation to gather, transport, embark and store the equipment and supplies necessary to the success (we hope!) of this 15th tuna tagging campaign in the central Pacific... Forty days in total autonomy for 10 people in one of the most isolated places on the planet, it is preferable not to forget anything! Fortunately, our house, the American longliner Gutsy Lady4 that we chartered for this mission, has plenty of room. Thirty metres of steel and 4.5 metres of draught, there's plenty of storage! But everything is as full as an egg, so please be careful when opening the kitchen cupboards unless you want an avalanche of packets of pasta, chips, cakes, canned food of all kinds.

We didn't think we'd make it, but here we are at 9am on 15 July 2021; the moorings are cast off. The two twin propellers stir up the water of the Kewalo basin harbor, the boat moves away and then glides along the quay, manoeuvred by Tim the captain, one hand on the joystick of the electric bar and the other on the engine throttles. All the eyes of the spectators, both those on land and those on board, watch and record this moment when the ship peels away from the quay, a bit like an iceberg separating from the island and becoming autonomous... or almost. Because at last we know where we are going! Destination - the heart of tropical tuna country - the equatorial zone of the central-western Pacific, fishing grounds of the most important flotilla of tuna boats in the world. We have 20 degrees of latitude to cover, which is about 2,222 kilometres. At an average speed of eight knots (about 15 km/h), it will take us almost five days... We are soon out of the shelter of Honolulu harbour and with the last marker buoy crossed, Tim puts the boat on pilot and starts to relax.  Well, that's not the end of it; we'd better get our gear ready and make our beds before the Gutsy Lady4 starts to dance on the seas... No beginners in this kind of cruise, the four in charge of the research project know exactly what to expect and don't waste any time getting organised.

This year the target is bigeye.

I felt anxious leaving port. Everything has gone unnaturally smooth so far, and there's a superstitious side of me (and most of the crew I've talked to) that suspects our luck will run out at some very ironic moment. I felt much better once we were on the water, keeping our hands busy. 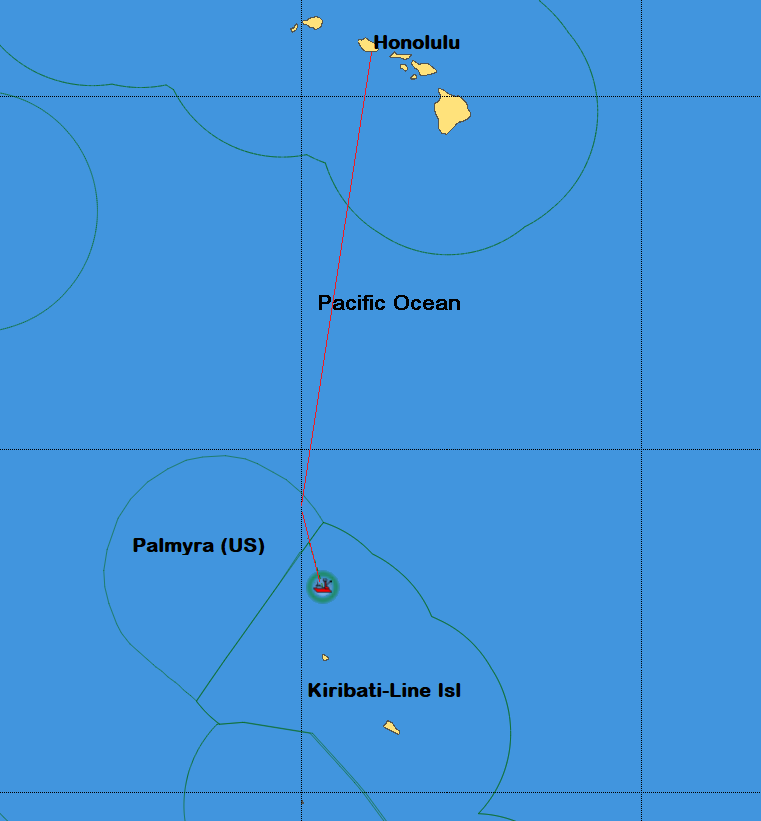 We have been steaming south for 6 days covering over 1000 nautic miles, and are now in the Exclusive Economic Zone (EEZ) of the Kiribati Line Islands. Weather has been rainy and squally, but we took the time to stop at a couple of drifting Fishing Aggregating Devices (FADs), the locations of which were shared with us by our collaborating fishing industry vessels who can locate them using the electronic buoys attached. Without them we would be so much less efficient in finding tuna schools to tag…

Since a lot of this year's crew were also onboard last year (3 of the 4 science crew, the captain, and 2 of the 5 boat crew) it's pretty much been a week long reunion. Including sending goading emails to the missing crewmates and and play pranks on each other. The Gutsy Lady 4 has been upgraded with a stabiliser arm in the last year, which has made days that would have had the boat rocking and rolling last year feel like a sleep in a hammock.

Despite the equipped echosounder buoys not showing very much at these FADs (Fish Aggregating Devices), we were able to get fish responding to the bait for several quick tagging sessions during these stops. This has resulted in over 1,000 fish tagged already, and this is before we have reached the main fishing ground for tagging activity- a great warm-up to get the team ready for action! Most of the tagged fish are juvenile yellowfin tuna, but we expect this to change as we head towards the equator and into the core bigeye tuna habitat - the real target for this central Pacific research cruise.

This research cruise is part of a large-scale tuna tagging project that started in 2006 in the western and central Pacific Ocean, with the financial support of the Western and Central Pacific Fisheries Commission (WCPFC) and many of its members.  Fifteen years have already been devoted to catch, tag and release as many tunas as possible in the waters where there is more of this type of fishing than anywhere else on the planet. Easier said than done: ok, 2.7 million tons of tuna (more than half of the world tuna catch) make one big heap but mixed with how many billion tons of water?  Anyway, no more time for philosophy.  Boat, gears, and crew are ready now, ready for the next FAD, bring it on!

Editor’s note:
The trajectory of the tagging vessel so far, with satellite imagery rain clouds overlaid. Looks like they might escape the rain soon and be heading into good bigeye territory! 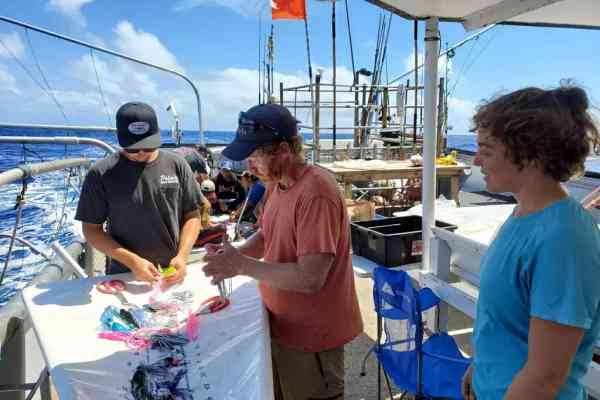 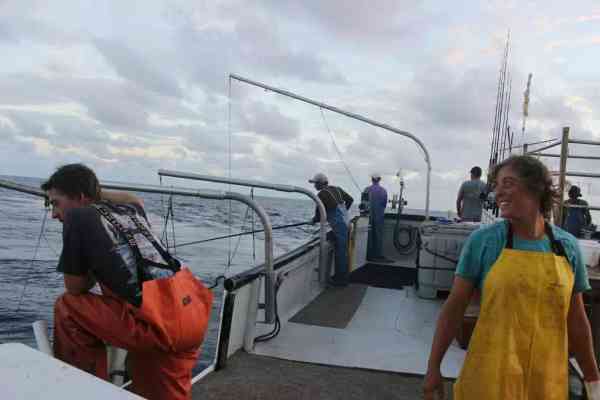 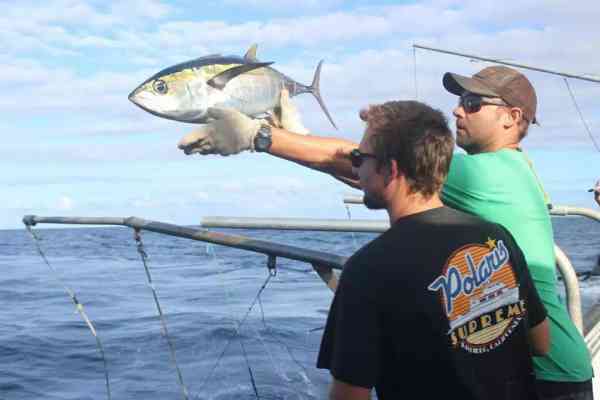