It’s the diverse, and sometimes creepy, world of insects that fascinates SPC's Entomologist Mark Ero when out in the field carrying out research activities.  According to him, “They  are the world’s miniature marvels, and the most successful group of organisms on earth.”

Please tell us a little bit about yourself – where you are from in Papua New Guinea and your professional background.

I come from a remote District called Okapa in the Eastern Highlands Province of Papua New Guinea (PNG). Because of the remoteness of my village, I was born to subsistence parents who survived on less than K5.00 (around 1 USD) a month, which mainly came from coffee harvested only once a year, and where wearing of a single pair of clothes for months was not unusual. I also grew up in an era where hunter-gatherer practices were norm, and that was a large  part of my life. Despite the life I had, I somehow made it onto high school where I completed my years 7 to 10. It is here where the process of continuing onto tertiary institutions (colleges and universities) became apparent to me. Fortunately, after year 10, I was placed among the top five percent of students in our national exam and was selected to continue my secondary school at Rockhampton Grammar School in Central Queensland, Australia under the AusAID scholarship program. If it weren’t for the scholarship support from the PNG and Australian national governments, I would not have survived as my parents would not have been able to afford the fees.

My PhD was in insect ecology looking at pest/natural enemy interactions using fruit flies and their egg parasites as the study system.  The lesson I learnt from my education journey was that persistence pays off.

How did you get involved in this field of work?

Whilst many individuals contributed towards my career path in this field, the initial indoctrination and encouragement to pursue this journey came from my undergraduate Entomology lecturer, the late Professor Ray Kumar, to whom I partially dedicated my PhD thesis to, in addition to my dear parents. His advice was that a lot remains to be discovered and understood about insects, something which I’ve come to realise to be true during my research career. He also wrote the first volume on the Insect Pests of Agriculture in Papua New Guinea. Apart from the encouragement from my undergraduate lecturer that charted my career path, I get my inspiration from the highly diverse, successful, fascinating, and sometimes creepy world of insects as I deal with them in my research activities. Their role in the world ranges from being pollinators, predators, ornamentals, food source, decomposers, and pests, to transmitters of diseases. Their modes of reproduction and survival is highly variable and intriguing. They are indeed the world’s miniature marvels, and the most successful group of organisms on earth.

You recently co-authored a paper for the Journal of Chemical Ecology publication which looked at the invasive coconut pest – the Coconut Rhinoceros Beetle Guam Type (CRB-G). Tell us about this paper.

This paper was part of collaborative research between my former employer, Papua New Guinea Oil Palm Research Association and researchers from the Natural Resources Institute based at the University of Greenwich, United Kingdom. It was initiated due to claims that the Coconut Rhinoceros Beetle Guam type (CRB-G) was  not responding well to the standard CRB-S pheromone (pheromone is a natural chemical used by insects for communication, but artificial mimics are developed and applied as part of pest monitoring and management programmes in crop protection). The study analysed the chemical composition of CRB-G pheromone and developed a mimic version of it. The new pheromone was then tested against the standard pheromone in a field evaluation study in the Solomon Islands where only CRB-G was present to determine the pheromone that was more attractive. The results showed that CRB-G was still strongly attracted to the standard pheromone. The recommendation from the study was to continue to use standard pheromone for CRB-G monitoring and management programmes.

How important is this work towards the eradication of the Coconut Rhinoceros Beetle?

This research significantly contributes towards CRB work in the region as its findings cut down on the need to produce a new pheromone for CRB-G, as well as recommending  improvement in trapping programmes using the standard pheromone to raise catch efficiency in monitoring and management programmes.

The Journal of Chemical Ecology was targeted for this publication because it is one of the most reputable international journals that suited our work, and its publications are extensively sourced. The journal promotes the understanding, function and significance of natural chemicals that mediate interactions within and between organisms. We are hoping that the paper will be widely accessed by researchers in this field of study and cited in many related publications.

This is the 19th journal paper publication for me either as a senior or joint author and am happy this paper got through. I learned from the very early stages of my research career that research without publication is incomplete. I would encourage those involved in research in the Pacific region to endeavour to have their research fundings published in reputable journals in their subject areas, as this is where our contribution to the pool of knowledge will remain long after we are gone. 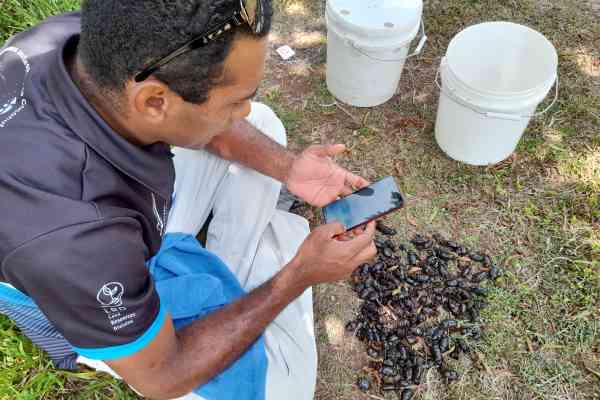