To mobilise action to save our oceans, the recent United Nations Ocean Conference bought the world together to propel science-based innovative solutions aimed at starting a new chapter of global ocean action.

Dr Katy Soapi, is an ocean scientist and Coordinator at the Pacific Community Centre for Ocean Science (PCCOS). She was a member of the Pacific Community delegation to the conference where Pacific leaders and scientists highlighted the importance of Pacific science and traditional knowledge in the race to save our oceans.

What can Pacific traditional knowledge and traditional ocean management techniques tell us about maintaining ocean health?

While the general health of the oceans is declining, here in the Pacific we still have some of the healthiest ocean and heathiest ocean eco-systems on the planet.

This isn’t by accident.

As we look for innovative solutions to protect and manage the ocean, we also need to look at what already exists, what is already working, and maintaining a healthy ocean. And that is traditional knowledge, culture, and practices of ocean management.

What are the key issues related to ocean health in the Pacific?

Ocean acidification is one of the key issues I’m concentrating on. Burning fossil fuels releases carbon dioxide (CO2) which is absorbed by the ocean. When CO2 combines with seawater it produces carbonic acid, which turns the seawater more acidic - a process called ocean acidification.

As the ocean becomes more acidic, coral bleaching is intensified and ocean acidification interrupts the lifecycle of shellfish which affects not only the shellfish but fish and other large marine creatures and the entire marine food chain.

Also, coral reefs are facing increased bleaching due to warmer seas and damage from pollution and ocean acidification is making things worse.

We know ocean acidification is happening, but we don’t yet understand the full effects it will have on our ocean. We need more investment in ocean science and monitoring so we can get a full picture of what’s happening, what’s likely to happen, and what we can do about it.

How do we tackle ocean acidification?

Like we tackle all great problems, together. As scientists, we are only just beginning to understand ocean acidification. To really understand it we need ongoing, long-term data sets that can show us the trends to know the rate of ocean acidification and its long-term impacts. So, we need the resourcing, and the investment in Pacific science to enable us to collect those datasets. And we need to start now.

Billions of people around the world rely on the ocean for their livelihoods. Here in the Pacific, the ocean is everything, people rely on it as a source of food and income and while the region contributes only a tiny fraction of global greenhouse gas emissions, we’re at the forefront of the impacts of both climate change and ocean acidification – which is often called its evil twin.  It really couldn’t be more urgent.

You attended the United Nations Oceans Conference, what do you want to see come out of it?

I want to see real action come from the conference. There was a lot of enthusiasm and excitement during the week, I want to see that level of ambition ramped up and maintained, not only from countries and our leaders in the Pacific but from the developed world.  Now is the time to find innovative solutions to ensure a heathy ocean.

Here in the Pacific, we have some of the healthiest oceans on the planet. We really need to understand them and understand the science of the oceans so we can protect them.

There is so much at stake.

Climate change and ocean health are very much linked just like the oceans are linked. We have different names for the oceans, the Pacific Ocean, the Atlantic Ocean and so on, but it’s really just one big ocean so when something happens somewhere in the ocean, when plastics and other pollutants end up in the oceans, which they are at an alarming rate, when the oceans acidify, when coral reefs die, it affects us all.

What I’d like to see come out of the conference are actions and investment in ocean science, particularly Pacific Ocean science, and recognition and use of Pacific traditional ocean knowledge and management in maintaining healthy oceans. 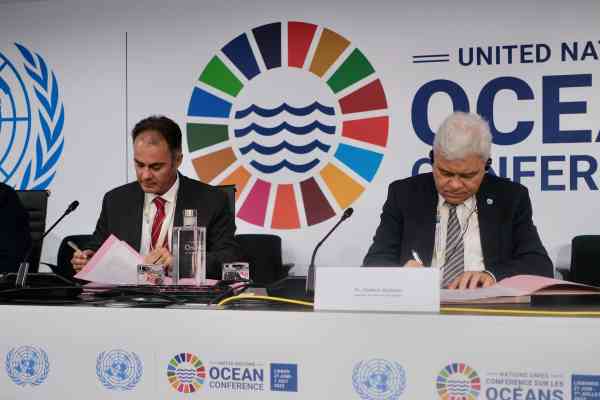