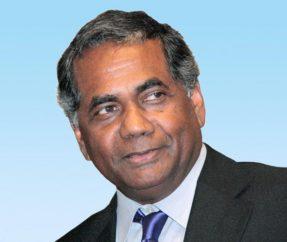 Dr Jimmie Rodgers comes from the Western Province of Solomon Islands. He graduated from the Fiji School of Medicine in 1980 and later gained postgraduate qualifications in anaesthesia (New Zealand) and health administration (Australia). He was Chief Medical Officer (Anaesthesia) at the Solomon Islands national hospital for several years and also worked for the Ministry of Health and Medical Services, where he held the post of Under-Secretary of Health Care for over six years and for a time was acting Permanent Secretary for Health.

As a result of his personal experiences in medicine and government administration, Dr Rodgers has a strong interest in sustainable development, particularly in rural areas. He has contributed to a number of regional development processes and initiatives, including the formulation of the Pacific Plan. He was a member of the Reflection Group for the Eminent Persons’ Review of the Pacific Islands Forum in 2004 and led a review of the Fiji School of Medicine in 2005. A constant feature of his work is the importance he places on clear and transparent management and open communication with member countries, development partners and donors, always with the aim of achieving his often-stated philosophy of ‘putting people first’. He is married with three children.