Genetic resources for food and nutrition security, from the Pacific to the world

Genetic resources for food and nutrition security, from the Pacific to the world

One of the key, silent challenges the Pacific islands and territories face is its narrow genetic base which has huge implications for food and nutrition security, and economic livelihoods. There is considerable conversation and a related sense of urgency around issues of non-communicable diseases, climate change, employment, a burgeoning youth population, food and nutrition security, and a lack of knowledge and concern on the issue of narrow genetic resources, specifically, plant genetic resources and their susceptibility to climate change and pests and diseases. The sense of urgency, however, is largely limited to specialist circles within ministries of agriculture and forests in the region, and with partner institutions and governments. For this reason, the growing work and impact of the Pacific’s only regional genebank, the Pacific Centre for Crops and Trees (CePaCT) which is a core part of the Pacific Community’s (SPC’s) Land Resources Division (LRD), has to a degree remained unnoticed. The success of CePaCT’s work has transitioned from conservation of plant genetic resources to its distribution and use within the Pacific and globally. The two key successes of CePaCT are its distribution spread and its contribution to both Pacific and global partners.

It is an example of SPC’s scientific and technical work with members and partners having far-reaching and deep impacts – having successfully maintained, and continuing to improve, acquisition and conservation of plant genetic resources; and adding value facilitating access to improved varieties addressing food and nutritional security and improved resilience to changing climate, drought, salt water intrusion, pests and diseases.

CePaCT was established in 1998 and turned twenty this year (2018). It evolved from more than 2,000 accessions of taro acquired from 10 Pacific island countries and territories as part of an LRD project, TaroGEN, which was a response to Samoa’s taro leaf blight (TLB) incursion that decimated the island country’s taro industry in 1993. Currently holding 1165 taro accessions, the largest globally, CePaCT earns the distinction of being the World Taro Centre and is mandated to introduce, conserve, and share new taro genetic diversity with farmers, plant breeders, and other scientists. This work was not only central to the emerging of varieties tolerant to TLB which restored Samoa’s food security and trade in the crop, but has strengthened the resilience of other Pacific island countries and territories, and is being used to curb the disease on the African continent.

After designation to the International Treaty of Plant Genetic Resources for Food and Agriculture (ITPGRFA) in 2009, elite taro lines at CePaCT are now available globally and Figures released in 2018 show that from 2004 to 2017, CePaCT distributed about 22,000 plant samples in the Pacific and across the world which is a great contribution to past and ongoing breeding efforts. It has distributed plant genetic resources to 47 countries, 24 of them non-Pacific (from the continents of Africa, Latin America, Asia, and from the Caribbean and islands in the Indian and Atlantic oceans).

Likewise, CePaCT, on behalf of Pacific island countries and territories now has access to plant genetic material from other regions that contribute to Pacific plant genetic diversity. Working with the Crop Trust and the Consultative Group for International Agricultural Research (CGIAR) leads to global exchange and impact working both ways.

According to Michel Ghanem, Programme Leader for Genetic Resources at LRD, CePaCT is moving toward becoming a Centre of Excellence. With a Business Plan and an Investment Plan to strategically establish partnerships toward long-term sustainability, it has a framework for moving into achieving global standards through a Quality Management System (QMS) being designed in conjunction with the Crop Trust, part of which entails creating Standard Operations Procedures (SOPs). It ensures CePaCT contributes effectively as a central hub for an effective seed system, builds a strong network, and responds effectively and efficiently to food and nutrition security in the Pacific and in the world.

2018 has seen success at several levels, the consolidation and sharing of data showcasing evidence-based impact and its contribution to Pacific and global partners not only with figures but with proper business planning, investment strategising, and moving to match global standards through the design and ongoing implementation of a quality management system. 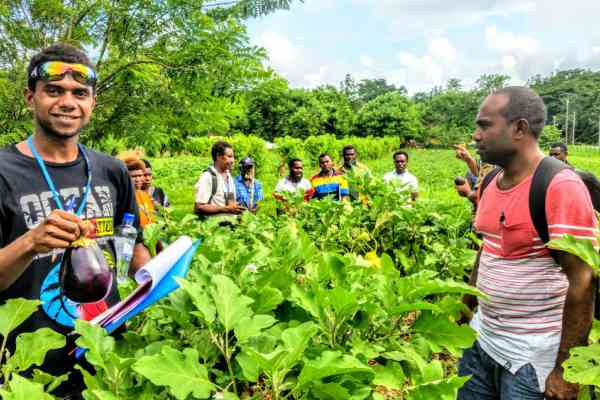