See what seeds can do

‘Before, when I want to plant, I have to have money. I have to go to the shop or to the agriculture office and buy vegetable seeds. Now, I do not need to go the shop. I just make my own seeds.’

Mary Nipisina is one of about thirty ni-Vanuatu women trained in selected fruit and vegetable seed production under the Pacific Community’s (SPC) Pacific Seeds for Life project funded under the SPC Innovation Fund. Like other trainees under the project, she is steadily transforming her garden, and according to her, both her life and the life of her family.

It is a hot, humid day in Tanna, one of Vanuatu’s southern-most islands. Mary is bending over a greening peanut patch pulling up weeds. It is one-tenth of the tour into her network of traditional gardens and only she can see weeds. To the unpractised eye, her peanut garden is immaculate. The earth under and around it a rich, deep black, a gift of Mount Yasur’s volcanic ash thousands of years in the making and still rumbling. Her fingers are nimble among the young peanut plants, barely a gentle brush as she cleans the plots.

‘I have always planted island cabbage, onions, capsicum, cabbages, tomatoes, pumpkins, yams and manioc. I can choose and use my own planting material for yams and manioc but I always had to spend money to buy vegetable seeds.’

Her first garden is about an hour’s walk from her home; there are seven more spread across the dense green foliage. Whilst venturing into training offered by SPC in partnership with the Department of Agriculture and Rural Development’s (DARD) Tafea Province Office on Tanna, Mary is one of several thousand examples of ni-Vanuatu farmers across the rich, volcanic archipelago successfully blending science with traditional knowledge to harvest a steady cornucopia of fresh food. She is using seed saving and seed production skills and knowledge learned from trainings but is establishing gardens using centuries-old mechanisms of separation according to traditional laws governed by kastom. ‘This first garden has peanuts, yams and some tomatoes,’ she says pointing into a seemingly endless mass of trellised yams. ‘In the other seven gardens, I have a mix of onions, island cabbage, capsicum, manioc, eggplant, pumpkins and more yams, she says with a laugh.

‘I used to worry about money to buy seeds, and sometimes, I have the money but there are no seeds to buy. So I have to wait until seeds come to the island through the shops or DARD. Now, I don’t have to wait! I just save my own and keep it in my house. I use this to plant.’

Mary’s new sense of power is palpable under the cool foliage of trees between gardens. Her bare feet are quick through a well-worn track in the underbrush. The black soil track is smooth, testament to her regular trips to maintain her gardens. Among her lush onion and capsicum gardens, she casts her eyes away to the bordering yams and lowers her voice.

‘We had [Cyclone] Pam a few years ago and we lost so much. Most of us in Vanuatu had to wait for seeds to come in from other countries. We could not plant our own food when we wanted to. We had to wait. We had the land and the weather became good but we had to wait. There was no more seeds. Today, I can tell you, I feel I have so much power in me because I know I will not have to wait again. Next time, after a hurricane, I will have my own seeds to start again.’

In its wake, Cyclone Pam left an indelible mark on the lives of people across several countries, including Vanuatu. With a population of about 260, 000 people, Vanuatu is categorised as the most At Risk or Most Vulnerable country by the United Nations University’s World Risk Index by virtue of its portfolio of natural disasters including volcanic eruptions, cyclones, coastal and inland floods, extreme heat, and drought against the strength of critical infrastructure enabling resilience. The year of Cyclone Pam, 2015 estimates placed about 64% of Vanuatu’s population at risk per major natural disaster. Successive years, while presenting differing percentages still place Vanuatu in the number one position for vulnerability. A key feature of this vulnerability is Vanuatu’s capital, Port Vila’s direct vulnerability given its geographical location – it sits directly in the path of cyclones and vulnerable to storms and storm surges, affecting the country’s ability to operationalise post-disaster support mechanisms. This affects, among other things, government’s ability to respond to the needs of farmers.

Against this backdrop, the Pacific Seeds for Life project training key farmers, including large numbers of women, in seeds saving and seeds production is critical toward the building of resilience in Vanuatu.

According to Gibson Susumu, Programme Leader for Sustainable Agriculture at the Land Resources Division of SPC , ‘The Pacific Seeds for Life project aims to empower the Pacific farming communities to have sustainable availability and access to diverse and quality seeds through policy strengthening, improving seeds distribution, and capacity.’

Linking to this, Sam Naiu, Principal Agriculture Officer (PAO) for Tafea Province provided context saying, ‘Cyclone Pam caused about 95% agricultural losses in the whole country. To have skills in seeds production and saving means that farmers do not have to depend on seeds from stores or through foreign aid. They have the power to decide what crops are important for them, save these seeds regularly, and when disaster strikes, they can go out on their own and plant from their own seeds supply.’

Mary Nipisina is one such farmer. She plants local root crops, and local indigenous fruit and leaf vegetables. Her gardens are reflective of Vanuatu’s customary ease to adhere to traditional knowledge and practices married with new scientific innovation supplied by DARD. She has her traditional gardens interspersed with new commodity vegetables and is selling at the Lenakel Market and to the Evergreen Resort.

However, according to her, ‘This training in seed saving and seed production is what has given me new power. I decide what I plant, when I want to plant, and I am not afraid of a disaster destroying my crops. I can begin again and I decide when and how I will do that.’ 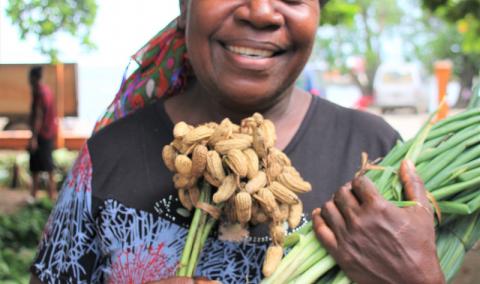 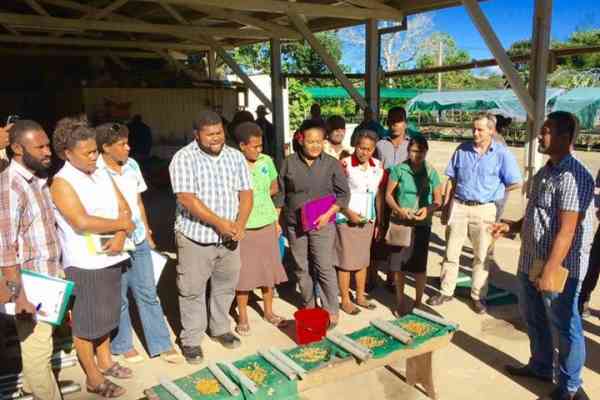