For many nights, sleep eluded Isao Mike from Kosrae State in the Federated States of Micronesia. Racked with great concern for his child living with a disability, Mike constantly worried about his son’s future, particularly in the event he and his wife were no longer living or able to care for him.

He would frequently say to himself, “As a parent, I have no peace. If something ever happens to me or my wife, who will take care of my son? Who will make sure he is cared for?”

But on the back of this worry and countless nights of elusive sleep was born a determination to act. Action that would secure his son’s future, and that of other children and people living with disability in Kosrae.

When the Kosrae Disability Act (Bill 191) was passed on 3 December 2021 by the State Legislature of Kosrae, it was victory for Mike and many parents in Kosrae raising and caring for children with disabilities. It was a win for Kosrae.

Bill 191 is a significant step forward for FSM and the Kosrae State Legislature. It sends a clear signal about the country’s determination to follow the Convention on the Rights of Persons with Disability (CRPD) which the 19th Congress of the FSM ratified on 7 October 2016.

International human rights conventions are an effective way of holding states accountable and serves as a guide for national legislation to safeguard marginalised groups in our societies. While many countries in the Pacific have ratified CRPD and, over time, have passed laws to comply with international human rights treaties, others such as FSM have only recently taken positive legislative action to protect and support persons with disabilities.

“As a parent, I have no peace. If something ever happens to me or my wife, who will take care of my son? Who will make sure he is cared for?”

For Mike, the urgency to act came in the wake of an attack on his son.

“For me ultimately, the motivation to do something, to have a law in place to protect my son and others living with disabilities, came about when my son was hit on the head by someone, and despite the court hearing, the perpetrator only got two months outside of jail,” he said.

“This was an eye opener for me, as a parent. I realised that simply educating people to respect persons with disabilities was not enough. We needed better protective measures for people with disabilities.”

Despite the existing resolution supporting the CRPD ratification, Mike said it did not come with a law for Kosrae State, and people living with disabilities continued to experience high rates of sexual and physical violence, inaccessible health and social services and inequality.

As part of the Kosrae Special Parent Network (KSPN), a non-governmental organisation (NGO) under the Kosrae Department of Education, Mike and other parents drafted a Bill titled the Kosrae Disability Act. They submitted it to the 12th Kosrae State Legislature and lobbied the State through awareness and advocacy to pass the Bill. These were key steps to ensuring the enactment of Bill 191.

KSPN is one of the PPAC grantees supported by the United States Agency for International Development (USAID) as part of the “Promoting Just, Engaged, Civic-minded and Transparent (PROJECT) Governance”. Through PROJECT Governance grant program, KSPN managed to advocate, raise-awareness and lobby the State to pass Bill 191. This speaks volumes of the initial success of PROJECT Governance and its support to the Pacific.  PROJECT Governance is a USD 19.8 million five-year partnership between SPC, the Blue Pacific Alliance partners (International Federation of Electoral Systems, East-West Centre and Care USA) and the United States Government through USAID.

Mike said Bill 191 promotes equal opportunities and respect for all persons with disabilities by ensuring accessible reserved parking spaces, building facilities, inclusive education, employment and social services in both public and privately-owned or controlled areas accessible to the public.

Berla Nena, a parent raising two children living with disabilities in Kosrae, said the passing of the Bill was a step in the right direction. She and her family moved to Kosrae from the United States.

“In the US, all services were provided to my children from birth. But when we moved to Kosrae, things became difficult for us because there were just not enough services for persons with disabilities here,” she said. “With this law in place, this means they have a better future.”

Among the significant change to the Kosrae Disability Act was that now the State of Kosrae was under obligation to provide services to persons with disabilities of all ages.

Power of Legislation in improving lives of vulnerable groups

Too often, we overlook the power or value of legislation in maintaining order in our countries and communities. What would life be like if we did not have existing rules and laws maintaining peace in our societies?

Be it related to health, social security, housing, education, environment, commercial/trade/business issues or protection, some of us may have taken for granted laws and legislations that directly impact our daily way of life. Legislation provides government a legal mandate to utilise available resources to offer services that will promote, protect and fulfil the constitutional rights of its citizens.

“I believe having laws in place, specifically for persons with disabilities will definitely enhance their ability to participate in community life and society as a whole and thus improve the quality of their life,” Hon. Palik said.

“I wanted to highlight that this is something we have to do. When our country ratified the CRPD then it became incumbent upon us to make an appropriate legislation that complements the convention,” he said.

Senator Andy Andrews, author of Bill 191, highlighted that the implementation of the Bill would commence with a focus on providing comprehensive education programmes and services for infants, toddlers and children with disabilities. He said they were also looking to amend some existing State laws such as provision of legal services and medical services at the hospitals.

Strengthened Partnership between Government and CSO

Through the support provided by PPAC, KSPN was able to strengthen advocacy and awareness efforts to lobby the members of the 12th Kosrae State Legislature.

Hon. Palik shared that whenever a Bill comes up for passage, public awareness, consultation and information gathering was a crucial part of the process and now focus is on implementation.

“We have already gone through that process, but we have yet to go out to the communities to make them aware of this Bill,” he said.

KSPN is currently finalising a documentary on the processes of advocating for the passage of the Bill and is now raising awareness and lobbying for its full implementation.

The process that led to the enactment of Bill 191 is a model and shows how CSOs and governments can work together for the greater good of the community.

For Mike Isao, the engagement process with the State has resulted in sustainable partnerships on the ground. “We have now been offered an office space by the Department of Education to assist us in our day-to-day operations,” he said.

“We have also seen a change in people’s attitudes after the Bill was signed into law, especially, changes in terms of creating disability-friendly surroundings,” he said.

For Mike, having the legislation and law in place is enough for now. It has given him peace of mind.

“Now that there is a Law in place, I am at peace knowing my son will be well taken care of if anything happens to me or my wife. The Bill does not only benefit my son, but it also benefits me, my wife and our entire family. I know that the bill will create the necessary measures and laws to protect persons with disabilities and I am looking forward to the positive changes this bill will bring about." 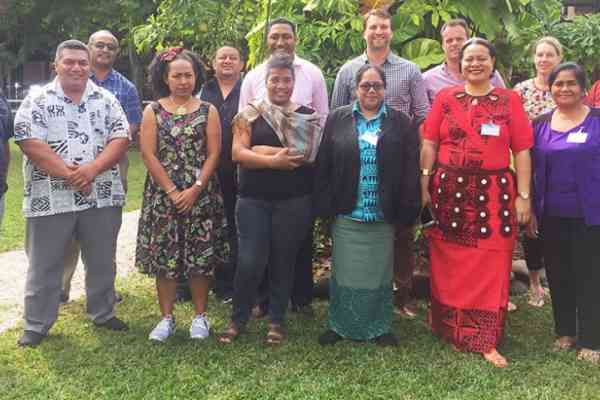 Stat of the week: It is estimated that 84.6% of people in Nauru living with a severe disability collect disability social protection benefits