Tuna help to map mercury pollution in the ocean

Whether as sushi, steak or tinned, tuna is one of the world’s most widely eaten saltwater fish, and yet it is known to contain toxic methylmercury, the most toxic form of mercury, which affects the nervous system, with foetuses and young children being at high risk (Box 1). The new environmental policies under the Minamata Convention5 for reducing mercury emissions, and their unhealthy effects on humans, are based on scant knowledge of how such emissions affect fish mercury levels. This document provides the first detailed mercury concentration map for skipjack tuna in the Pacific Ocean, and highlights the link between anthropogenic (human-made) mercury emissions and concentrations in this species in the northwest Pacific for the first time (Médieu et al. 2022). Our study also shows that natural ocean processes heavily influence tuna mercury concentrations, especially in terms of the depth at which methylmercury bioavailability is at its highest in the water column.

In a previous study on three tuna species (yellowfin, Thunnus albacares; bigeye, T. obesus; and albacore, T. alalunga) in the western and central Pacific, we demonstrated that mercury concentrations were higher in the largest and deepest-diving fish, but that they also depended on species and geographical origin (Houssard et al. 2019; Lorrain et al. 2019). In this latest multidisciplinary study, funded by the French National Research Agency in the framework of the MERTOX6 project, the French National Research Institute for Sustainable Development (IRD) and the Pacific Community (SPC) – assisted by a large number of partners and through access to several specimen banks7 – looked into where the mercury in Pacific tuna was coming from (Fig. 1A) by focusing on skipjack (Katsuwonus pelamis), which is the most commonly eaten tuna species globally

Find out more and read the full publication from the Fisheries Newsletter: 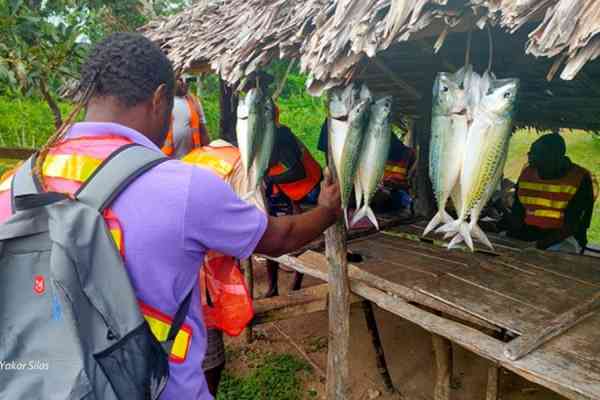