Logotonu Meleisea Waqainabete coordinates the Centre for Pacific Crops and Trees (CePaCT), the main gene bank in the Pacific. In this blog, she looks back on her journey, from her mother's garden in Samoa to the Fiji plant vault where she helps strengthen the Pacific food system. This story is part of a series dedicated to the collaboration between the Pacific Community (SPC) and Australia’s Department of Foreign Affairs and Trade (DFAT).

I grew up in a small village called Poutasi in the Falealili district in Samoa. There, people rely almost exclusively on agriculture to make a living. My father would wake me up at 4:00 a.m. to go with him to spray bananas for pest prevention! But what really inspired me during my childhood was my mother’s passion for flowers. She would spend days in the garden, trying to grow the most beautiful, healthy flowers.

I believe that my vocation comes from there. With my parents, I discovered that agriculture could both feed people, but also make the world more colourful. After high school, I wanted to study to become an agricultural researcher, but at the time there weren't many science teachers in Samoa, so the government encouraged us to choose this this path. This is what I did. But I was not made for teaching...I barely lasted a month!

So I decided to devote myself entirely to agricultural research and it was while working in the laboratory of the Ministry of Agriculture in Samoa that I discovered tissue culture for plants. I was absolutely fascinated by the use of science in agriculture development – and from there, my career path was set, right up to now. In 2007, I started with SPC as a lab technician, assigned to CePaCT whose aim is to assist Pacific Island countries and territories conserve the region’s genetic resources and to provide access to the diversity they need. The gene bank is in Fiji and conservation is the core business of the centre, with priority given to the region’s staple crops: taro, yam, sweet potato, banana, cassava and breadfruit. The taro collection is particularly unique, being the largest collection of taro diversity globally – with over 1,000 accessions of traditional and improved cultivars.

Eight years ago, I became CePaCT’s curator. My job was to make sure that all the accessions and relevant information, such as where they originate from and what is unique about them, were well maintained. Another important part of the role was to ensure that access agreements were in place, meaning that countries were willing to share their genetic materials for mutual regional benefits, but also for the whole of humanity. We don’t want to see our collections as museum pieces that just sit there and the good news is that genetic resources from CePaCT are being increasingly shared with other regions of the world facing similar challenges such as soil salinization, droughts and floods – most of which are linked to climate change.

A couple of years ago, I became the programme leader of the Genetic Resources thematic area under the Land Resources Division of SPC which also hosts the CePaCT gene bank as its main feature. It was a big change for me, but still allowed me to still use my primary vocation – whenever I get the chance, I replace technicians who are away and conduct tissue culture operations for them.

The biggest change in this new role is the interaction I now have with donors, including a key one, Australia's Department of Foreign Affairs and Trade (DFAT), which has been funding CePaCT since its inception, either directly or indirectly, through donor-funded projects. Their involvement though has not only been in terms of funding, but also of technical exchanges. The first project on which I worked closely with DFAT was the creation of a new business plan for CePaCT. The main focus of this initiative was to realize CePaCT’s long term potential as a key player in addressing regional and global priorities around food and nutrition security as well as climate change. The business plan was to have a long-term vision for our activities; analyse future challenges, in particular the growing impacts of climate change in the region; and put in place appropriate responses. The collaboration with DFAT resulted in a more robust plan.

I love working with my DFAT counterparts and though they are not scientists, they’re very aware of development issues in the region and the challenges facing a programme like CePaCT. Australian funding is flexible enough to allow us to adapt to these challenges, constantly improve our programmes and better meet the needs of Pacific people. It's quite unique in the international development world and I realize how lucky we are every day I walk into the lab and ask my team to be as innovative as possible!

I see myself continuing to serve the region through my work with CePaCT for many years to come. The work we’re doing is certainly helping the region address food and nutrition security issues and important health challenges such as the fight against non-communicable diseases (NCDs). NCDs are the leading cause of death in our region, accounting for 60-75% of mortalities. I know that from a genetic resources point of view, we can contribute to strengthening the region’s food system and provide healthier, highly nutritious food for our people. 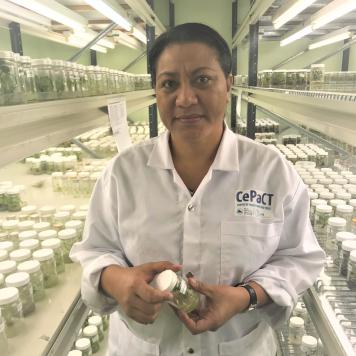