In an historic extraordinary outreach session, the UN Committee on the Rights of the Child met government officials, UN agencies, civil society and children to discuss the situation of children’s rights in the Pacific.

“For many years, we spoke and dreamed of holding a session outside Geneva,” said Committee Chair Luis Pedernera. “This week, that dream became a reality. It’s an historic moment.”

The Committee, which reviews the progress made by States in implementing the Convention on the Rights of the Child, met in Apia from 2 to 6 March to review the situation of children’s rights in the Cook Islands, Federated States of Micronesia and Tuvalu. The Committee also held a preparatory meeting for a future review of Kiribati.

During their sessions, Committee members met children, UN agencies, national human rights institutions, and civil society to discuss the human rights issues that are important for children in the Pacific region.

“By holding a session in the Pacific, we wanted to draw the world’s attention to the pressing issues affecting the enjoyment of children’s rights in the region,” said Pedernera. “This week, the children we met with told us that all stakeholders need to work harder to guarantee their rights to participation, education, health, climate change and freedom from violence.”

For Audrey, 16, the session taught her that children’s views matter. “Adults might not remember they once dreamed of speaking up,” said Audrey, who moderated a discussion on children’s right to health. “When they got their chance [to speak up], they forgot to leave a door open for the other children, waiting in line.”

“During this session, we learned that we have the right to be heard,” she added. “And children’s opinions, perspectives and problems should be voiced.”

The Pacific is the region most adversely affected by its remoteness from Geneva, where the Committee usually meets. Since 2016, six of the seven reviews of States from the region were conducted via video-link, with limited participation of civil society and none from children.

For the Cook Islands, the session allowed countries in the region to bring their delegations to the session for “a more comprehensive and meaningful dialogue, with better representation of civil society and an opportunity for children to learn and participate in this important process,” said Honourable Mac Mokoroa, the Minister of Internal Affairs and head of delegation.

Pedernera highlighted the learning opportunity that the session gave the Committee. “We learned about the unique context and rich culture of the Pacific region, and engaged with passionate child human rights defenders, including children with disabilities, in ways that would never have been possible from our meeting room in Geneva,” he said. In another historic first for the Committee, all meetings of the session benefited from sign language interpretation.

"Hosting this milestone meeting in Samoa was crucial for enhancing the visibility of the Convention in our region," said Prime Minister Tuilaepa Sa’ilele Malielegaoi. "The session allowed for the Blue Pacific people, especially the children, to effectively and actively engage with the Committee. Samoa encourages all other treaty bodies to follow the great example that this Committee has set.”

Pedernera stated that by bringing this session to the Pacific, the Committee hopes that it has inspired child human rights defenders in the region to strengthen their cooperation for the advancement of children’s rights. He also expressed hope that the session would lead to stronger engagement by States, civil society and children in the UN human rights mechanisms.

“For children, we hope that they now understand how much the Committee appreciates their contributions, and that their views are a valuable and necessary part of our work,” Pedernera said. “I hope this is just the beginning of strong and meaningful participation of children from the region in our work.”

Remarks by SPC DDG, Dr A. Aumua at 84th Extraordinary Session of the Committee on the Rights of the Child 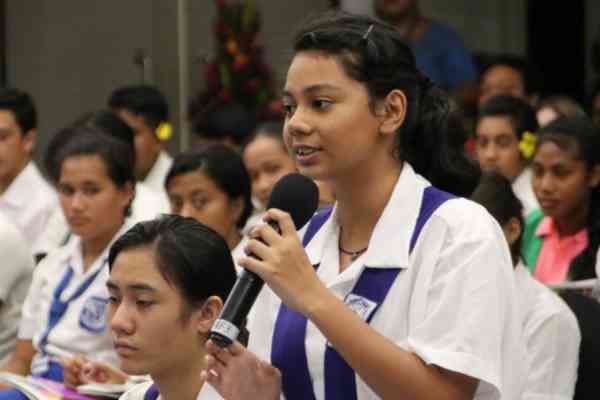