The Pacific Partnership to End Violence Against Women and Girls (Pacific Partnership) programme has launched a poetry anthology publication comprising a collection of Pacific poems and artworks about human rights and social justice suitable for students in Years 7-13.

Working towards implementing human rights work in schools and communities, SPC RRRT, with the support of The University of the South Pacific’s (USP) Oceania Centre for Arts, Culture, and Pacific Studies (OCACPS), embarked on this project with editor, Dr Francis Mangubhai, a notable Fiji-born educator and researcher in applied linguistics to collate this poetry anthology which will be used as a teaching and learning resource for schools students and young people in the Pacific.

Acknowledging how changes occur in our Pacific communities like everywhere else in the world, the anthology is titled Rising Tide, due to climate change which is a social justice issue and a topic in which Pacific communities lead the world. It is also an expression that is used metaphorically – there is a rising tide of change occurring in our societies, including changes related to equality, inclusion, and ending violence against women. Young people who will be the next generation of adults, can, through their attitudes, values and voices, contribute to this rising tide of change.

Speaking at the launch of the anthology, the Head of Political, Trade and Information at the Delegation of the European Union for the Pacific, Galia Agisheva said, ‘Human rights and social justice are the core values of the European Union, which is founded on engagement to promote and protect human rights, democracy and rule of law. The EU views all human rights as universal, indivisible and interdependent.

According to RRRT Director, Miles Young, the ‘Rising Tide’ is an essential, evocative and unique anthology featuring Pacific poets and artists expressing their voice on social justice issues that exist in our Pacific societies.

“The poems in this book challenge us to think and take action on issues pertinent to the Pacific and globally such as inequalities, discrimination, injustices and violence against women, girls and children,” Young said.

He added that through this creative interplay of art, words and rhythm, it is hoped that Pacific children, who are the present and future of the region will be inspired to rise like the tide and create and model change that will make Pacific communities, just, safer and more peaceful.

USP’s Vice Chancellor and President, Professor Pal Ahluwalia said the University was proud to have partnered with SPC RRRT in the publishing of this anthology of Pacific Poetry on human rights and social justice through engagement of the Oceania Centre.

He added that the collaboration is a reminder of the importance of arts and culture, and pacific-led and home grown arts and recognition of artists. This is something that the University has committed to, not just through the Oceania Centre but also through the School of Languages, Arts and Media’s Pacific Writing Forum which has encouraged emerging Pacific island writers through publication, readings and SLAMS.

“I believe that there are discussions for the collection to be made available through the USP Book Centre and I am very pleased to hear that an exhibition of the same title “Rising Tides” will continue over the next week at the Oceania Centre, featuring the artworks in the collection and select poems,” Professor Pal stated.

The poetry anthology is available on the SPC RRRT website here.

About the Pacific Partnership:
The Pacific region has some of the highest rates of violence against women recorded in the world – twice the global average with up to two in every three Pacific women impacted by gender-based violence. Along with high rates of violence, women and girls in the Pacific region experience constant and continual inequalities including low levels of participation in decision making, limited economic opportunities, and restricted access to critical services and rights.

The Pacific Partnership to End Violence Against Women and Girls (Pacific Partnership) brings together governments, civil society organisations, communities and other partners to promote gender equality, prevent violence against women and girls (VAWG), and increase access to quality response services for survivors.

To achieve this, the Pacific Partnership aims to transform the social norms that allow violence against women and girls to continue; to ensure survivors have access to quality response services; and to support national and regional institutions to meet their commitments to gender equality and prevention of violence against women and girls. Working through partners, it will promote equal rights and opportunities for all Pacific people, through innovative approaches to education, access to essential services, and policy development.

The EUR22.7 million partnership is funded primarily by the European Union (EUR12.7m) that supports all outcome areas of the programme, with the Governments of Australia (EUR 6.2m) and New Zealand (EUR 3.2m) providing targeted funding to the second outcome with cost sharing from UN Women (EUR0.6m). The programme’s three outcome areas are jointly coordinated through a partnership between the Pacific Community (SPC) Regional Rights Resource Team (RRRT), UN Women Fiji Multi-Country Office (MCO), and the Pacific Islands Forum Secretariat (PIFS).

SPC RRRT leads outcome one of the Pacific Partnership which aims to enhance Pacific youth’s formal in-school and informal education on gender equality and prevention of violence and women and girls, focusing on integrating human rights and responsibilities into primary and secondary curricula in Kiribati, the Republic of the Marshall Islands, Tuvalu, and extending to Vanuatu.

The SCE programme looks at equipping school students and young people with the skills to be able to make good, considered decisions, work collaboratively and peacefully, and think critically and creatively to ensure the sustainable future of our Pacific Island countries. 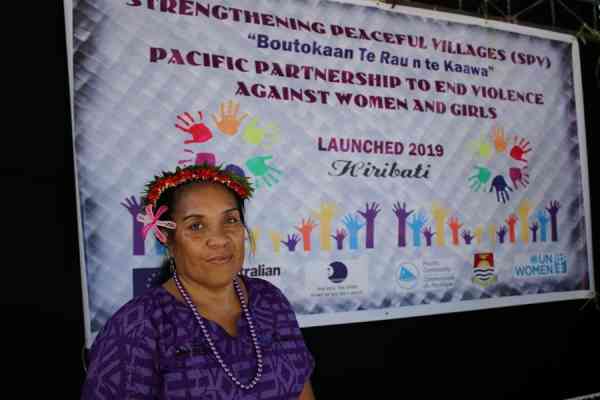