SCICOFISH is a European EDF 10 – funded project being implemented by the Secretariat of the Pacific Community (SPC).
The project objective is “the conservation and sustainable use of coastal and oceanic fisheries resources in the Pacific ACP region”.
The model SEAPODYM is used to estimate the response at the regional and national levels to exploitation, management intervention and environmental variability, including climate change. The main list of activities is:

This work is used both to assist Pacific Island Countries in the management of their marine resources and to contribute to the work of the Scientific Committee of the Western Central Pacific fisheries Commission. 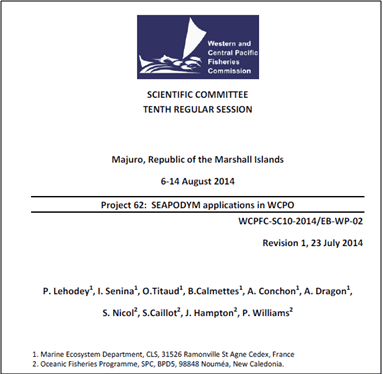 The project purpose is to increase the capacity of Pacific Island Countries to negotiate adaptations that will enhance the resilience of tuna stocks and fisheries to the affects of IPCC projected global warming scenarios during the 21st century, by building on and extending the model development and applications already undertaken.

The project will undertake analyses of four tuna species (skipjack, bigeye, yellowfin, albacore) to characterize the uncertainty in the predictions to alternative population dynamics model structures, parameter uncertainty and plausible climate change scenarios. These analyses will provide a synthesis of how the distributions of tuna stocks are likely to shift with climate change. It will provide information that Pacific Island Countries require to evaluate and select appropriate adaptation measures (for example, modifying access rights to foreign fleets, vessel day trading). 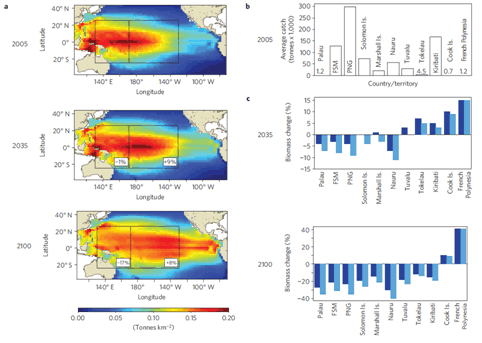 A major area of development concerns the use of tagging data in the optimization approach of tuna population dynamics. Combining tagging data with SEAPODYM age-structured population model leads to augmentation of the model state vector through inclusion of variables describing the density of the cohorts of tags. The primary objective is to improve the estimation of habitat and movement parameters.

Electronic tagging data are used as multiple release-recapture data between consecutive positions of individual tracks at the resolution of the model.

Predicted distributions of skipjack tuna in g/m2 (both young and adult life stages) as the result of preliminary experiments conducted with different likelihood composition: (left) including CPUE and length frequencies components only; (right) CPUE, LF and tagging data.

Within the project INDESO, the Indonesian government is developing its infrastructure for operational oceanography that includes an operational model of spatial tuna dynamics (skipjack, yellowfin and bigeye) for the monitoring and management of tuna fisheries in Indonesia.

A regional high resolution (1/12° x day) SEAPODYM model is coupled off-line to a physical circulation model and use integrated primary production derived from satellite ocean color data. Open boundaries Conditions are provided weekly by a global operational model. Fisheries are included in the model and described with gear selectivity and catchability. The regional model outputs will be used to rapidly improve the knowledge on tuna species in the region and to assist Indonesian Fishing authorities in monitoring and managing tuna fisheries. 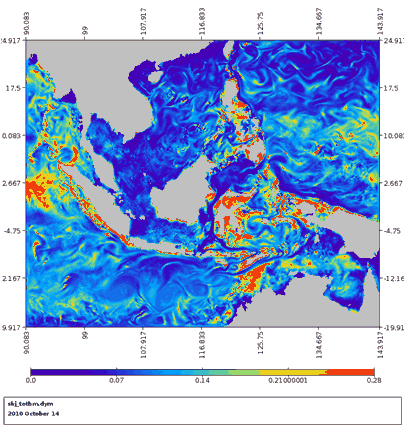 First results of the regional high resolution model for skipjack.

EURO-BASIN is the European branch of the International BASIN Program (Basin-scale Analysis, Synthesis & INtegration) focusing on climate and human forcing, ecosystem impact and consequences for living resources management in the North Atlantic.

Within EURO-BASIN, an application of the model SEAPODYM is developed for the North Atlantic albacore stock with a careful definition and validation of a spatially explicit fishing dataset prepared from publically available sources (ICCAT) to provide the first spatially explicit estimate of albacore density in the North Atlantic by life stage. Density distributions together with the fishing data used for the estimates are provided in the pangea database. 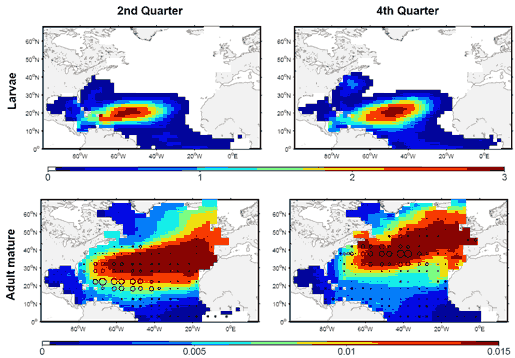 This study focuses on the application of SEAPODYM to the Chilean Jack Mackerel (Trachurus murphyi) population stock distributed throughout the sub-tropical waters of the South Pacific Ocean, and managed under the framework of the South Pacific Regional Fisheries Management Organization. It was included as one of the objectives of a research project submitted by a consortium to a call for tenders released by the EU DG-MARE. 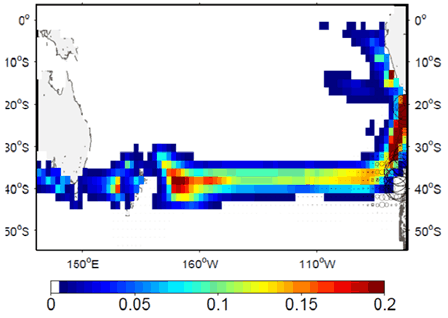 The French (ANR) project MyctO‐3D‐MAP proposes an innovative combination of methods to assess the distribution and habitats of the main aggregating myctophid species of the Southern Ocean: 1) the use of 2 myctophid predators, the southern elephant seal and king penguin as bio‐samplers, 2) acoustic surveys, 3) biophysical oceanography, and 4) modelling.

Outputs of micronekton biomass distributions from a SEAPODYM regional high resolution (1/12°x day) configuration using physical forcing from Mercator-ocean models are provided to analyse the behaviour of predators. 38kHz acoustic data are collected onboard the R.V. Marion Dufresne to be used for the optimization of the micronekton model. 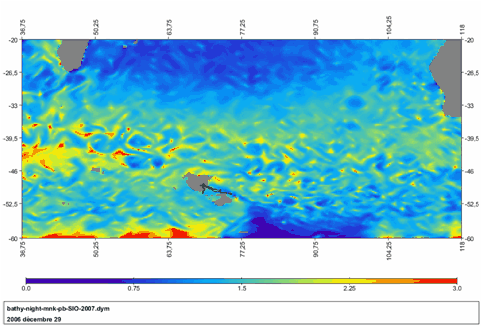 Three key variables are needed as forcing to the SEAPODYM micronekton model: the Temperature (0 – 1 000 m), the ocean currents (0 – 1 000 m) and the primary production (vertically integrated). This project will test the sensitivity of the model to its forcing and will use in particular a new multi-satellite product developed from past and present ESA and non-ESA Earth Observation missions.

AMORAD: Improvement of radionuclides dispersion and impact assessment modelling in the environment

The French (ANR) research project AMORAD led by IRSN will study the transferts of radionuclides in sediments and trophic chains in relation with catastrophic accident. The mechanisms of transfert and concentration in the marine food chain are investigated and will be included in SEAPODYM.

An operational model will be developed to produce maps of risk indicators that could help to monitor the sampling strategy in case of radionuclide release in marine environment. 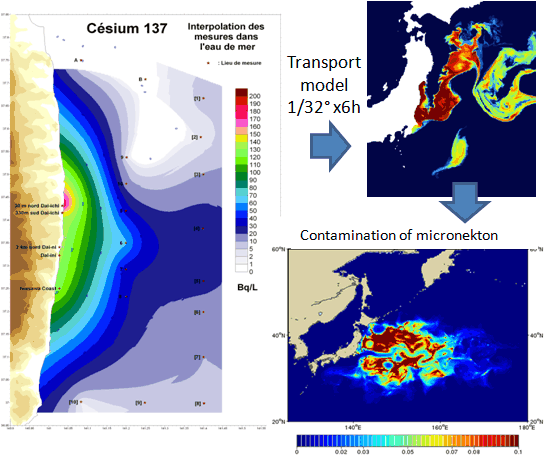 The Pacific-based optimal parameterization of SEAPODYM for swordfish has been used to obtain a configuration for the Indian swordfish population. Simulations are driven by 1952-2012 historical geo-referenced catch data and by the same environmental forcing (NCEP-ORCA2-PISCES). Available catch per unit of effort (CPUE) data from the fisheries operating in the study area are used with the MLE approach to estimate fisheries catchability parameters. 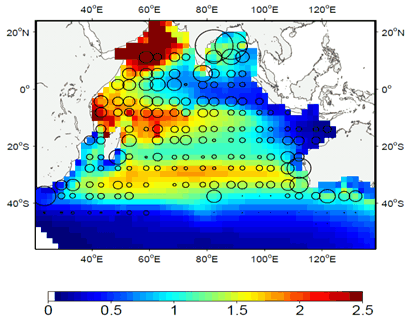