In the Pacific, coconut is king.

It charms visitors to our shores, as well as commands the respect of Pacific Islanders that depend on it for their livelihood.

Known regionally as the ‘tree of life’, every part is used, from its tallest frond down to its rooted trunk – from the sweet, delectable juice and fresh meat of its fruits, to its husks to that fuel fires, the fronds that make baskets, and the trunks that go into building homes and furniture.

It rules our beaches, with its swaying palms melting into our blue skies and turquoise seas.

In smaller outer atolls where crop cultivation is not possible, coconut is the only staple food, ensuring food security for island inhabitants.

Sadly though, the health of our coconut palms has come into focus in recent years.

An invasive species called the Coconut Rhinoceros Beetle (CRB) has been wreaking havoc in many Pacific Island nations, threatening to wipe out the coconut industry and causing losses to economies that rely on it and its oil, in addition to other palm species, for revenue.

As the world marks International Day of Forests on March 21 with the theme - ‘Forest Restoration: A path to recovery & wellbeing’, it is vital that we raise awareness on our coconut palm industry and the threat to it from invasive species.

Our coconut palms help drive many Pacific economies, with Pacific Island countries supplying 50 percent of the world’s copra trade. Papua New Guinea is the largest exporter of copra in the world.

In the Solomon Islands and Fiji, the majority of informal sector livelihoods rely on coconuts for food security and income.

However, the growing threat of CRB has the potential to seriously damage Pacific island states and their local and regional economies.

If the beetle continues to spread, it is estimated the Pacific could lose up to $NZ237 million ($FJD347m) per year by 2040 from damage to coconut trees alone.

A concerted effort to manage the beetle has been initiated by the New Zealand government through its Ministry of Foreign Affairs and Trade.

The regional ‘Pacific Awareness and Response to Coconut Rhinoceros Beetles (PARC)’ project will help strengthen the Pacific’s capacity to detect and control the spread of CRB.

The project is coordinated by SPC under the auspices of the Pacific Plant Protection Organisation. As the regional body responsible for plant protection matters, SPC provides its knowledge and capacity to help control this persistent pest.

In Fiji, a local survey completed by SPC’s Land Resources Division showed CRB presence has increased in the aftermath of the cyclones the nation has faced over the past three years. This invasive species has become more dangerous, however, as it has mutated to a new strain called CRB-G or Coconut Rhinoceros Beetles Guam, after it was discovered near Guam’s Tumon area in 2007.

Molecular analysis found these beetles were genetically different from the existing CRB-S population and were resistant to the NudiVirus infection that had initially subdued the CRB-S population.

Since its discovery in Guam, the CRB-G strain has been confirmed in Hawaii, Papua New Guinea, Vanuatu, Solomon Islands, Northern Marianas and more recently, New Caledonia.

Though Fiji is free of the new strain, CRB will continue to spread in the Pacific unless effective monitoring, surveillance and management programmes, including the identification of effective biological control agents, are established. As the new strain continues to flourish, the original population is still causing considerable damage.

The four-year PARC project will operate mainly in Vanuatu, Solomon Islands and PNG. It seeks to (1) Empower and strengthen regional capacity to control the spread and suppress the population of CRB, (2) Enhance Pacific ability to prepare for and respond to CRB pest incursion, (3) Upgrade and integrate national level surveillance systems into a regional CRB-G management surveillance system, (4) Integrate a regional approach to CRB-G biosecurity education and awareness, and (5) Build a regional CRB-G research and development management system.

The PARC team sit at The Pacific Community Land Resources Division and work closely with AgResearch, one of New Zealand’s largest Crown Research Institutes, and local partners, Vanuatu, the Solomon Islands and Papua New Guinea to control and hopefully eradicate both variants of CRB.

Critical to our sustenance, our economies, our heritage and our lifestyles, the coconut must be saved so that it can thrive for future generations. Eliminating the pernicious coconut rhinoceros beetle is a vital initiative that  ensures coconut trees will continue to be king, ruling our blue skies and crystal coasts for years to come. 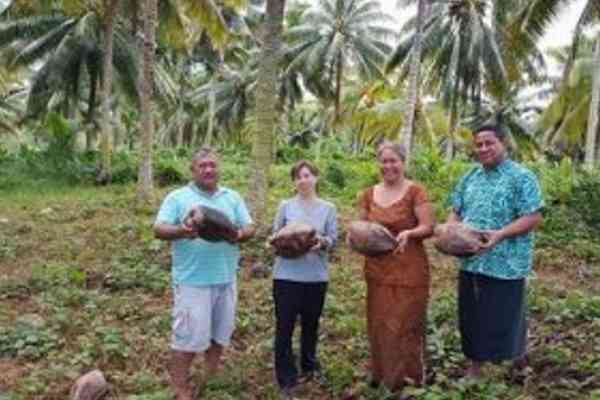