The four exclusively atoll nations came together in Fiji recently to discuss the fact their homes and cultures are at an increased risk as a result of the global climate crisis. High level representatives from the Republic of the Marshall Islands, Tuvalu, Kiribati and the Maldives recognised in the one-day science session that climate change is disproportionately impacting their Island nations, and threatening the future of their people.

President of the Republic of the Marshall Islands, Dr. Hilda C. Heine expressed her hopes in a video link in taking a united approach to the challenges of atoll nations, “We face extraordinary and exceptional circumstances as a block of atoll nations to highlight the urgent need for support for atoll adaptation. We should find ways to sustain our dialog and we can identify some concrete ways we can work together and our collective efforts as atoll nations. Kommol tata."

The one-day event was a science and climate change learning session coordinated by the region’s peak scientific agency, The Pacific Community (SPC) on 30 April in Fiji.  During the meeting leaders from the four nations shared common experiences and debated what actions were needed to help them not only overcome the impact of climate change and increased disaster risk on their homes but challenges in continuing to grow sustainable development outcomes for their people.

Atolls are formed from the remains of extinct seamounts or volcanos, which have eroded or subsided partially beneath the water. The land that remains above water is typically low lying and narrow, leaving it extremely vulnerable to sea level rise, cyclones and tsunamis. While there are many counties with atolls, there are only four exclusively made up of these geological features.

Amjad Abdulla, the Maldives Director General for Ministry of Environment, highlighted how the impact of climate change is forcing his country to make tough decisions,  “Efforts to address the impacts of climate change on land loss, beach erosion, water security, health and fisheries, have been diverting funds away from Government functions. To manage this better, the Maldives Government is currently zoning the entire archipelago where people are going to be settled, because we simply can’t afford to protect all sites.”

Popular media frequently confuses projected and observed impacts of climate change and sea level rise, leaving the impression that there is some legitimate debate around the reality of the issue. However, in respect to sea level rise what we are seeing today in terms of marine hazards and flooding is absolutely consistent with the sea level rise science of projected impacts, and projections out to 2100 look disastrous for inhabited atoll islands even at the very lowest end of the models. It is an increasingly inconvenient truth that affords atoll nations little time to act.

The need for accelerated adaptation, through national adaption plans was highlighted during the discussions, focusing on some basic agreed principles including;

Through the dialogue the atoll nations stressed the need for increased knowledge sharing among atoll nations, the development of downscaling models, and a greater emphasis on published atoll research through the IPCC mechanism and others. The possibility of creating an atoll specific research centre was also explored.

Benjamin Graham, Chief Secretary of the Republic of the Marshall Islands, saw the meeting as an important step for atoll nations to take control of their own density, “We’ve been focusing on saving the world, but in the last couple of years, we have seen the writing on the wall- and it’s a sea wall. The time has come for a Plan B. We’re starting right now, and want to learn as much as we can from our friends in the other atoll countries.”

Following this meeting, leaders of the Coalition of Atoll Nations Against Climate Change (CAN-CC) will be briefed and further opportunities for cooperation will be discussed including participation in the CAN-CC Summit in July, Pacific Islands Forum in August, as well as the upcoming Climate Summit and UN General Assembly meetings.

This meeting was supported by the Geoscience, Energy and Maritime Division (GEM) at the Pacific Community.  It was coordinated by the atoll nations directly. Donor partners, CROP agencies, international development agencies and academic institutions were in attendance. New Zealand Government supported also funded event logistics. 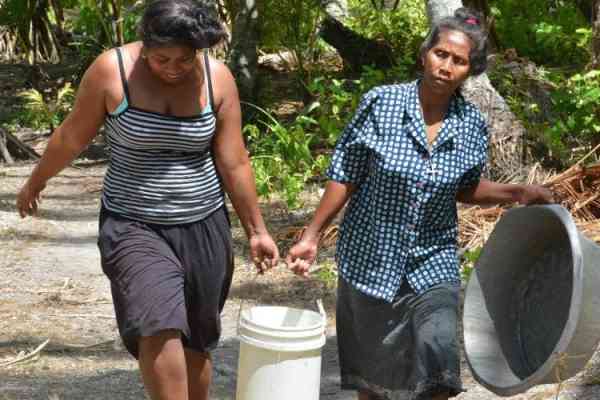