Photo: PNG's education statisticians who were part of a recent EQAP training on education data

Imagine being able to track students’ learning progress in real time with a few clicks on a computer. Or being able to generate a report on a student’s entire school life; one that gives a more holistic picture inclusive of attendance rates, socio-economic background, and extra-curricular efforts. Today, this has long been a reality – for the developed world. Not the Pacific region.

In the Pacific, many schools still use a manual filing system – one that is more vulnerable to human error and limited in access. However, this is rapidly changing though as Pacific countries have built a central computer-based education management information system (EMIS) that is slowly being linked to schools. The most basic of systems allows schools to fill and send hard copy questionnaires or email their data to the central education office that maintains their EMIS. Yet, despite many being considerably basic, the management software has impacted in a big positive way.  EMIS has in fact become the tool of choice: a game-changer that connects essential education data to the administration hierarchies within an education system – at the ministry, provincial, and school levels.

At least two Pacific Island countries, namely Fiji and Vanuatu, are operating sophisticated EMIS systems that allow a student direct access to their external exam scores. This means students and their families no longer need to queue at the school or education office to access examination results. Instead, they simply log in with a unique code through their desktop or smartphone to access the information. These countries independently developed their EMIS and have actively supported the Pacific Community’s Educational Quality and Assessment Programme (EQAP) in encouraging other Pacific island countries to adopt this innovation in place of a manual system.

Aside from timeliness and accessibility, why is this latest application of EMIS touted as the best information management tool? Its capacity to collect and organise an enormous amount of information makes it popular. The ability to disaggregate information is another. All these capacities help education authorities to make informed policy decisions to support learning in the classrooms. For instance, the school attendance rate allows for administrators to identify students who are at risk of dropping out of school. It is widely accepted that a student who is increasingly absent is at a higher risk of prematurely ending their formal education. Hence, attendance rates can also be used to identify communities that are at risk because a robust EMIS would be able to collate the at-risk data according to communities and districts/provinces. Such an EMIS would need to have a student profiling component that stores details like residential zone and socio-economic status. Being able to identify at-risk communities or at-risk students allows for early targeted support to be offered.

As the education data team leader and EMIS advisor at EQAP, I have witnessed the exciting transformation of Pacific systems from the traditional to the modern. Without any doubt, EMIS has brought about increased confidence in having data as evidence for decision-making, especially as expertise in managing it becomes strengthened. This is most evident in the fact that Pacific countries are now completing their education statistical digests and other forms of statistical outputs, something that very few were able to do with confidence. It is unsurprising then that all Pacific education systems are investing in building their EMIS. Many are exploring the inclusion of features like automatic transmission. This feature allows all connected systems access to new data, almost immediately after it is entered by a school. This gives governing authorities access to real-time data, enabling better planning and less wastage of resources.

Perhaps the most exciting of EMIS advancements is the integration of data sources. Three systems have been shown to be doing this successfully: Vanuatu’s EMIS system (VEMIS), Fiji’s EMIS system (FEMIS) and the Pacific Schools Information Management System (PacSIMS), which is designed and supported by EQAP. The cloud-based PacSIMS system – designed by EQAP’s information and communications technology (ICT) team, allows for integration. So far, at least four Pacific education systems have integrated a PacSIMS module into their respective EMIS. These modules have been designed to serve specific needs. For instance, there is an assessment module that collates and processes assessment results, and a module that helps manage school leadership.

Pacific Island countries have also added new features as part of their EMIS such as a Water, Sanitation and Hygiene (WASH) module and a free transport subsidy module. Fiji’s EMIS (FEMIS) even has a disaster-risk management module. This module organises critical disaster-risk information on the various schools and their respective zones – all of which support preparedness plans. This integration function, which in essence links EMIS to other data systems (academic as well as administration systems) in a country’s education landscape, boosts data management as well as collation capacity. This adaptability is particularly important, especially as reporting obligations become more sophisticated. These obligations include reporting progress on the education targets set out in the Sustainable Development Goal 4 (SDG4), and progress on the indicators determined by the Pacific Regional Education Framework (PacREF). Broadly put, all the data culminate in showing a country’s state of education and indicate the progress that has been made.

Clearly, EMIS has transformed Pacific education’s information management and reporting despite being relatively new to this region. I am also convinced that advancements in this area will be even more accelerated, in part because the global COVID19 epidemic has propelled most education systems to prioritise online learning and management systems. 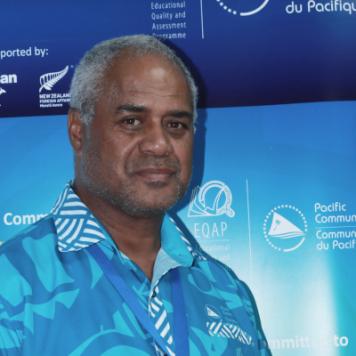 Stat of the week: School Infrastructure in the Cook Islands and Niue Building a Culture of Education Data Use in the Pacific