Powerful sense of unity and hope emerges from climate dialogue Despite a dire yet powerful picture painted by Pacific leaders about the emerging climate crisis in the region, a High-level Dialogue on Climate Change between Pacific leaders and the French President has ended with optimism and joint commitment for action.

The at-times emotional dialogue, which took place at the headquarters of the Secretariat of the Pacific Community (SPC) in Noumea, New Caledonia, was attended by more than 150 representatives of Pacific community members, donors, other development partners and SPC staff.

The President of the Republic of France, François Hollande, reaffirmed his country’s commitment to advance the Pacific climate change agenda and put it at the forefront of forthcoming climate agreement negotiations in Lima next month, and in Paris in 2015.

“The worst war is the one we ourselves have organised,” President Hollande said. “It’s a war against our future generations. The world has never had such an important issue to deal with and that’s why France will be proud to be alongside the Pacific Community.

“We must set our trajectory for the post-carbon era. If the poorest, most vulnerable countries can’t be accompanied in their transition to sustainable development, then there will be no binding agreement on climate change.”

President Hollande announced that France will fund a senior international climate change expert, to be based at SPC from early 2015, who will manage SPC’s ongoing climate change portfolio and provide technical support to Pacific countries and territories in coordination with the Secretariat of the Pacific Regional Environment Programme (SPREP) in the lead-up to the climate change conference in Paris.

He reaffirmed that France would push for a percentage of contributions from the Green Climate Fund to be allocated to the Pacific region and would endeavour to mobilise funds from the European Union and the World Bank so climate change response efforts in the Pacific could be as novel and effective as possible.

Delivering a compelling message on behalf of the Pacific leaders group present, the President of Kiribati, H.E. Anote Tong, pledged the support of Pacific nations to France in the lead-up to COP 21.

“We believe it’s time for action on climate change because for the countries around this table, time is running out,” President Tong said.

“We’re a resilient people. We have survived up until now but our capacity to survive is being compromised by climate change, so perhaps now we need stronger support from others.

“We are willing to give France as much support as needed. We would like to pledge that support in order to achieve an outcome that is necessary. We hope we are communicating our feelings. It’s a feeling of extending a hand to the global community in this case,” President Tong said.

The most recent assessment of the Intergovernmental Panel on Climate Change (IPCC) confirms that the risks faced by Pacific Island nations are increasing – a view shared by SPC scientific and technical specialists:

Some of thedisturbing points raised by Pacific leaders and others at the dialogue today included: 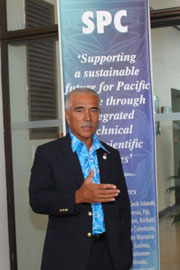 The French Minister for Foreign Affairs and International Development, the Hon Laurent Fabius, and the French President's Special Envoy for the Protection of the Planet, Nicolas Hulot, also took part in a Roundtable and bilateral meetings with Pacific leaders.

For a list of participants and more on the Pacific High-Level Dialogue on Climate Change visit this website.

Quotes from High-level Dialogue Participants:
Enele Sopoaga, Prime Minister of Tuvalu: “We must come out of Paris with a comprehensive agreement. I believe the momentum is there and it’s a matter of sustaining that momentum. Tangible targets and objectives and an agreement that is binding on everyone, and an agreement for Small Island Developing States that has loss and damage provisions, strong insurance facilities, particularly to help protect vulnerable countries like Tuvalu. That’s the message we really need to focus on.”

SPC Director-General, Colin Tukuitonga: “We are here because of a global crisis: a climate change crisis that presents a real threat for all the societies of the Pacific. President Hollande’s and Minister Fabius’ visit is a privileged opportunity for Pacific leaders to highlight the tangible impact of climate change on the lives of Pacific people, and the significance of the 2015 Paris Summit for the Pacific. Indeed, the outcomes of the Paris Summit will, to a large extent, determine the fate of many Pacific island countries over the course of this century.”

Ratu Inoke Kubuabola, Minister of Foreign Affairs, Republic of Fiji and Chairperson of the Conference of the Pacific Community (via a written statement as he was unable to attend): “We look forward to France's leadership in ensuring a meaningful legally binding climate agreement that involves all countries, and that will ensure that the temperature rise is contained below 1.5 C. Such an agreement should be based on the universal principles of equity, fairness and common but differentiated responsibilities. The current visit by the President of France, to the SPC and this dialogue with Pacific Leaders, is a timely message to the global community that there is definitely room in the Pacific for everyone willing to build a more resilient Pacific people in the face of emerging global challenges.”

Initiated by the SPC, the High-Level Dialogue on Climate Change gave Pacific leaders a timely opportunity to progress the agenda on the serious climate change challenge for the region with the host and chair of the 21st session of the Conference of the Parties to the UN Framework Convention on Climate Change where a new, universal climate agreement is due to be reached.