Drue: The village caught between a rock and a hard place

In the remote village of Drue on the Fijian island of Kadavu, the locals face a life-changing decision: to remain at the mercy of the rising ocean or move their entire community to higher ground.

When a powerful tropical cyclone struck her village in 2018, she says she felt abandoned. 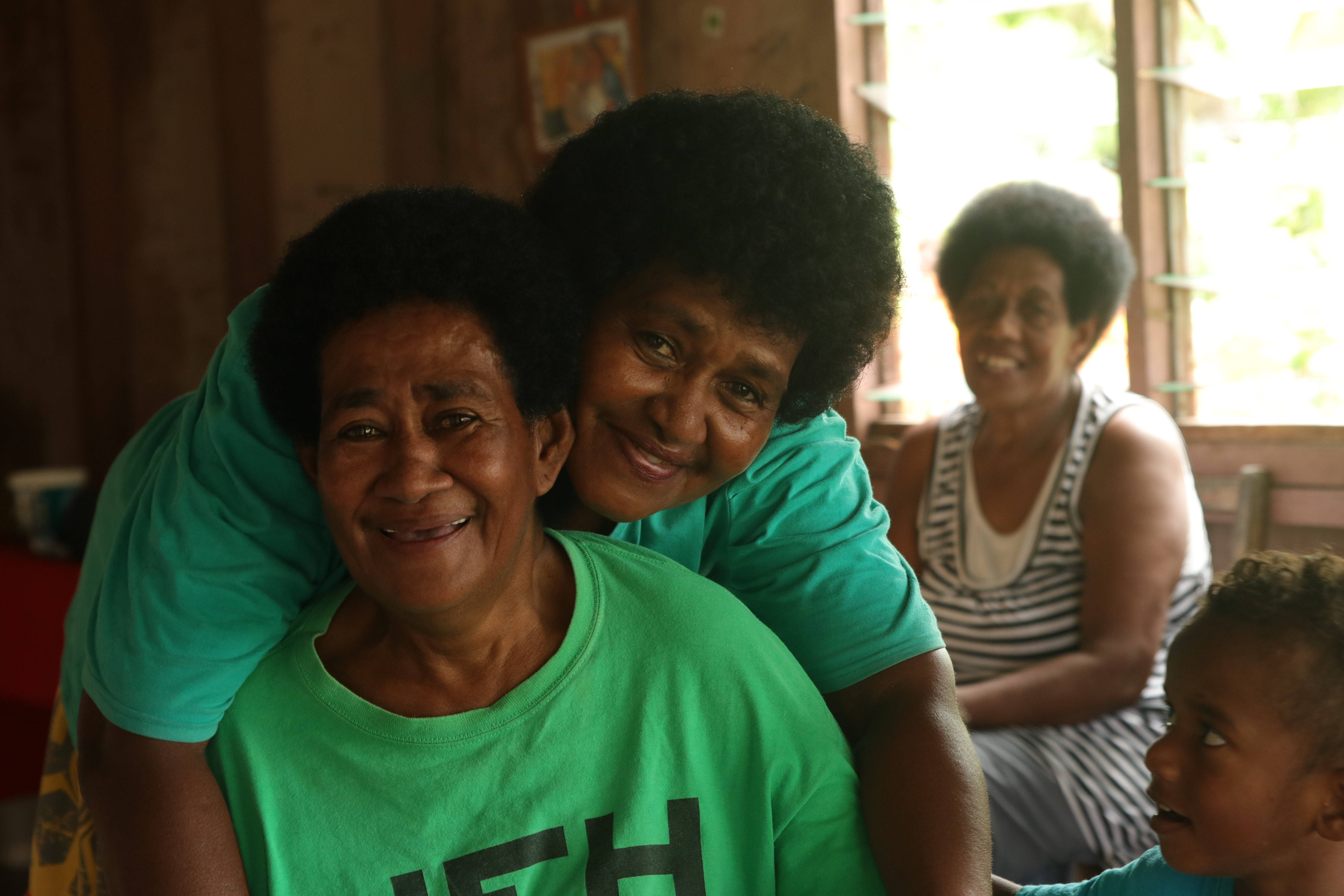 Miriama lives in Drue and says she felt abandoned when her village was hit by a powerful cyclone.(Supplied: Ethan Gabriel)

"One day before Cyclone Keni struck, I was alone at home. No-one came to check on my wellbeing. When the winds started to intensify, I didn't know what I was going to do. I was helpless.

"My sister-in-law came to my rescue as the winds and the waves tore my house to shreds. I've been living with her family ever since."

The storm surge generated 8-metre waves that crashed more than 100m into the village.

Combined with wind gusts of up to 215 kilometres per hour, 10 of the community's 27 homes were severely damaged.

Two years later in April 2020, and before they could fully rebuild, Drue was hit by a second, more powerful storm.

Adding to Fiji's woes, the recovery effort was severely impeded by the COVID outbreak.

The village of Drue had not fully recovered from Tropical Cyclone Keni when Harold struck two years later.(Supplied: Dan Naivakadranu)

A bomb was set off in the village

Cyclones, storm surges and flooding are commonplace for communities across Fiji.

But the added influence of climate change means these disasters are becoming more intense, according to Naomi Jackson, a technical officer in oceanography with Pacific Community (SPC).

"We know that low-lying atolls and coastal communities are experiencing sea-level rise through climate change, and potentially extreme cyclones that will exacerbate the risk of coastal flooding and increase the likelihood of extreme waves," Ms Jackson says.

It's not just scientists sounding the alarm.

"After an hour had passed, the big waves started to pound our shorelines.

"When I looked outside my window, I could see the waves were higher than the coconut trees — we were lucky that it was low tide. 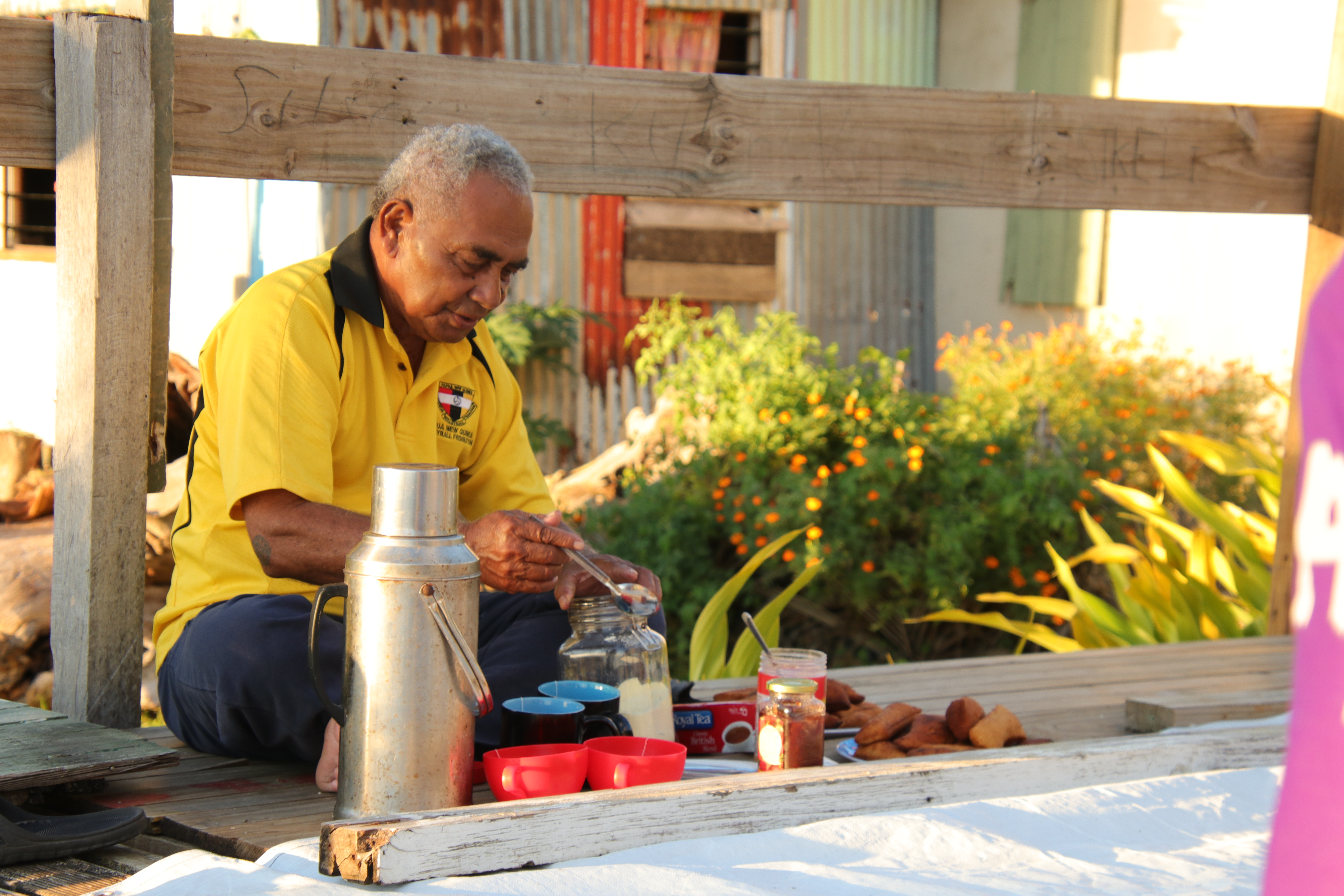 Ratu Paula says the waves during the cyclone were higher than the coconut trees.(Supplied: Ethan Gabriel)

“I crawled to a safe pathway under the house that I had prepared earlier and took shelter with the chickens and the dogs.

"I remember there were only three waves that swept through the village — we all fled for our lives."

Ratu Paula says when Tropical Cyclone Harold struck last year, he took his family to another house further from the ocean to take shelter.

"During the height of the cyclone, I kept looking at my watch — an hour had passed — we were praying for the cyclone to die out.

"The strong winds felt like someone was using a pinch bar to remove the nails off the roofs.

"After the winds had stopped, we made our way outside.

"I went to check on my house to find half of the house gone, including everything inside except the kitchen sink.

"While we were still inspecting what was left of our homes, the children ran to the beach to collect fish that were brought in by the big waves.

"We suddenly felt a wind, much stronger than the first.

"This destructive wind lasted for almost two hours. It felt like a bomb was set off in the village."

The easterlies blow on me

The Drue people pride themselves on their rich history, and their village is significant to the indigenous people of Fiji.

It’s immortalised in a famous Fijian song Liwavi au na Tokalau (the easterlies blow on me), which has become somewhat of an anthem for the people of Kadavu.

In pre-colonial times, the area was a centre of tribal warfare and Drue was established as a fortress for the self-proclaimed King of Fiji, perched on a cliff overlooking the sea.

In the late 1800s when missionaries brought Christianity to Fiji, the villagers were encouraged to move down from their hill fortress to the beach to gain easier access to maritime trade.

The village has remained at that low-lying site since.

But now Ratu Paula, Miri and the rest of the community are faced with a choice: to stay put and face the rising sea, or once again upend their village and move to higher ground.

A 2016 report by the Pacific Community (SPC) identified Drue as one of several villages on the island of Kadavu requiring relocation, due to its increased vulnerability to disaster.

Ratu Paula says he is starting to accept that moving may be necessary.

"The village of Drue has been one of the many places tourists stop by to spend their vacation and experience the true hospitality of the Drue people.

"[But] due to the consecutive number of cyclones that have hit Drue, we are now coming [around] to the idea of relocating to higher ground.

"We consider this decision to be much safer than getting hit by the cyclones and tsunamis that keep destroying our homes and farms."

'We know very well the dangers'

But it's not so simple, and relocation has been a topic of great concern during village meetings.

For many in these remote communities, access to the financial resources to relocate is difficult, and it's especially so for the people of Drue who have already had to rebuild twice in the past three years. 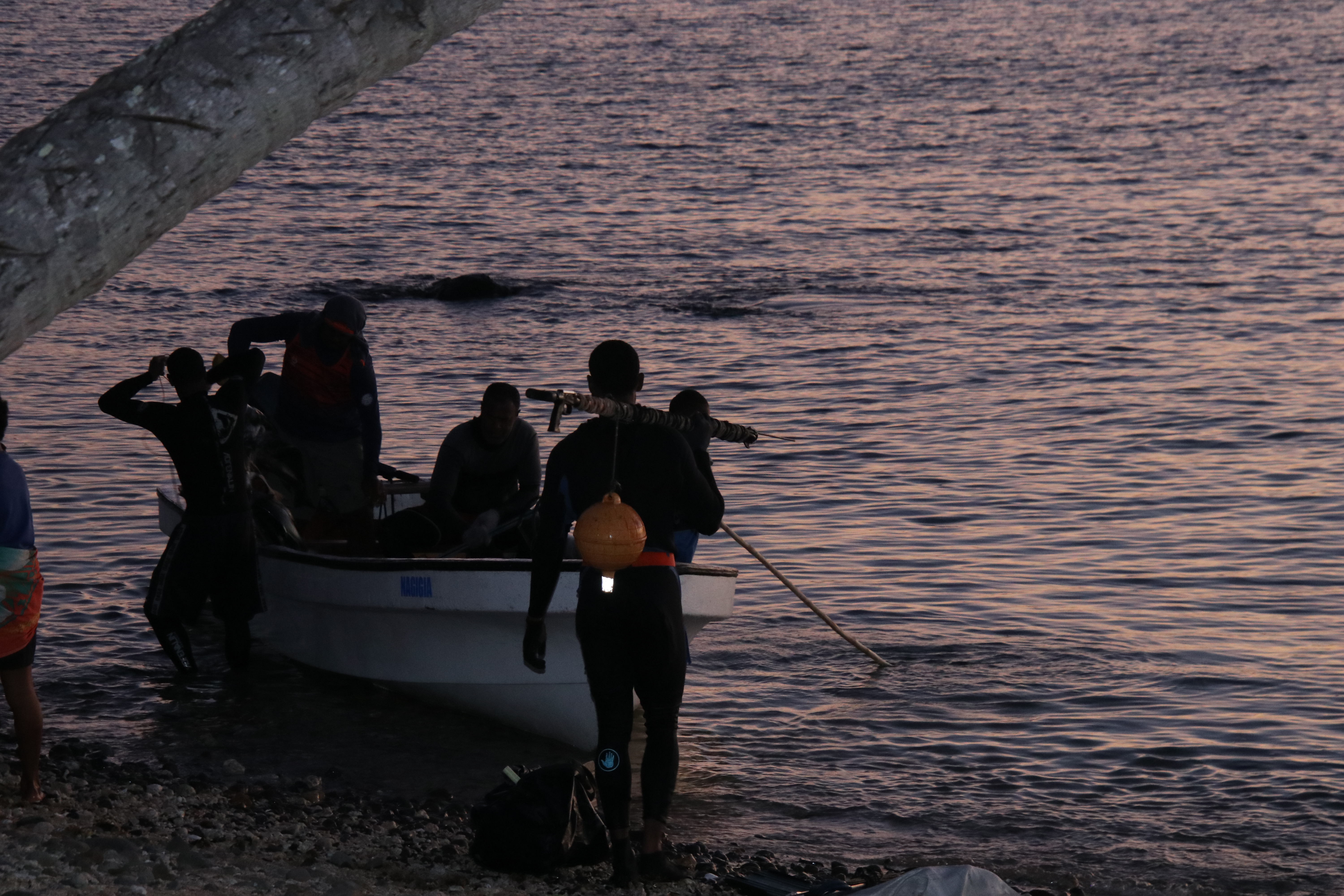 Fish are an important source of food and income.(Supplied: Ethan Gabriel) 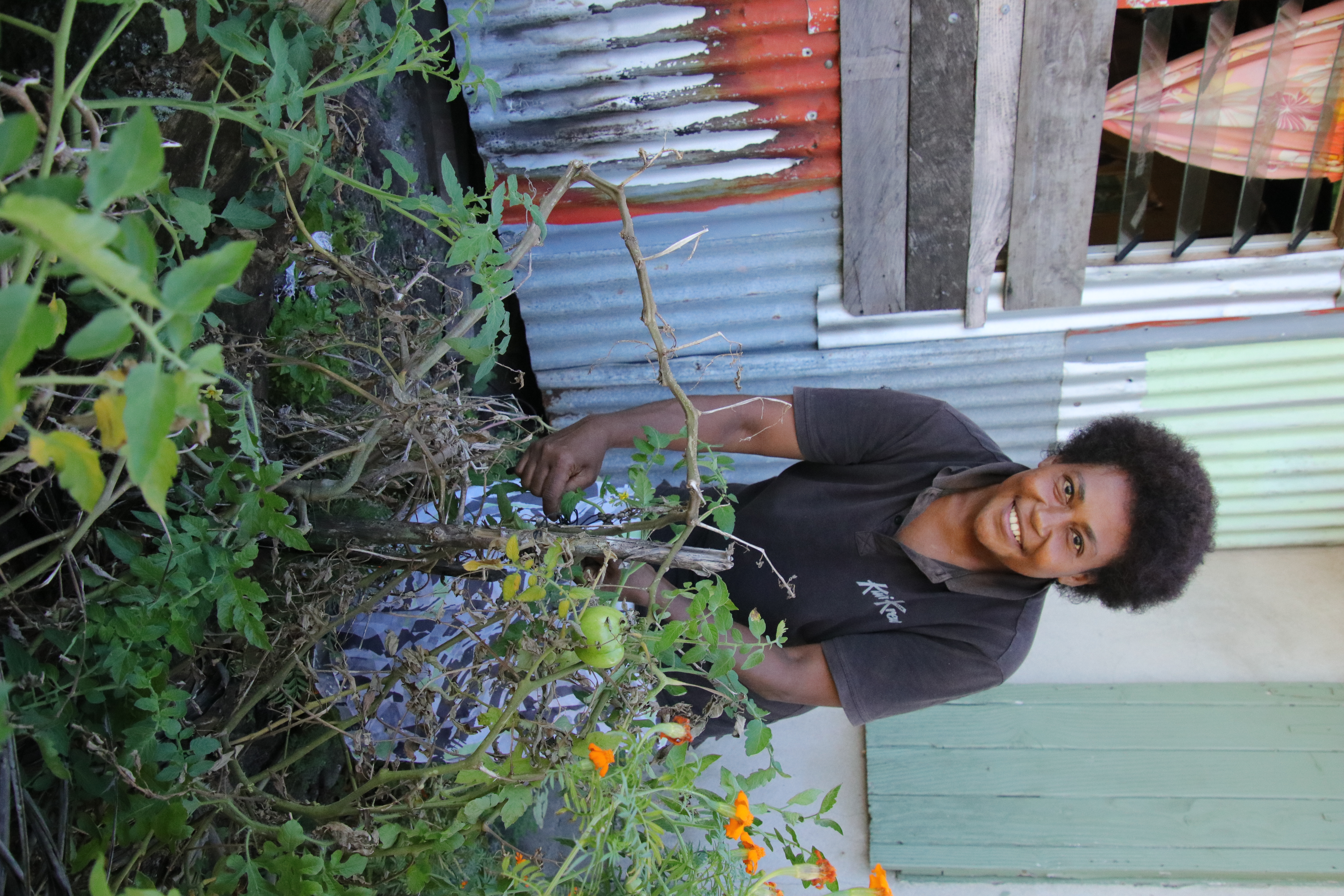 Selling produce at the market brings in a small income.(Supplied: Ethan Gabriel) 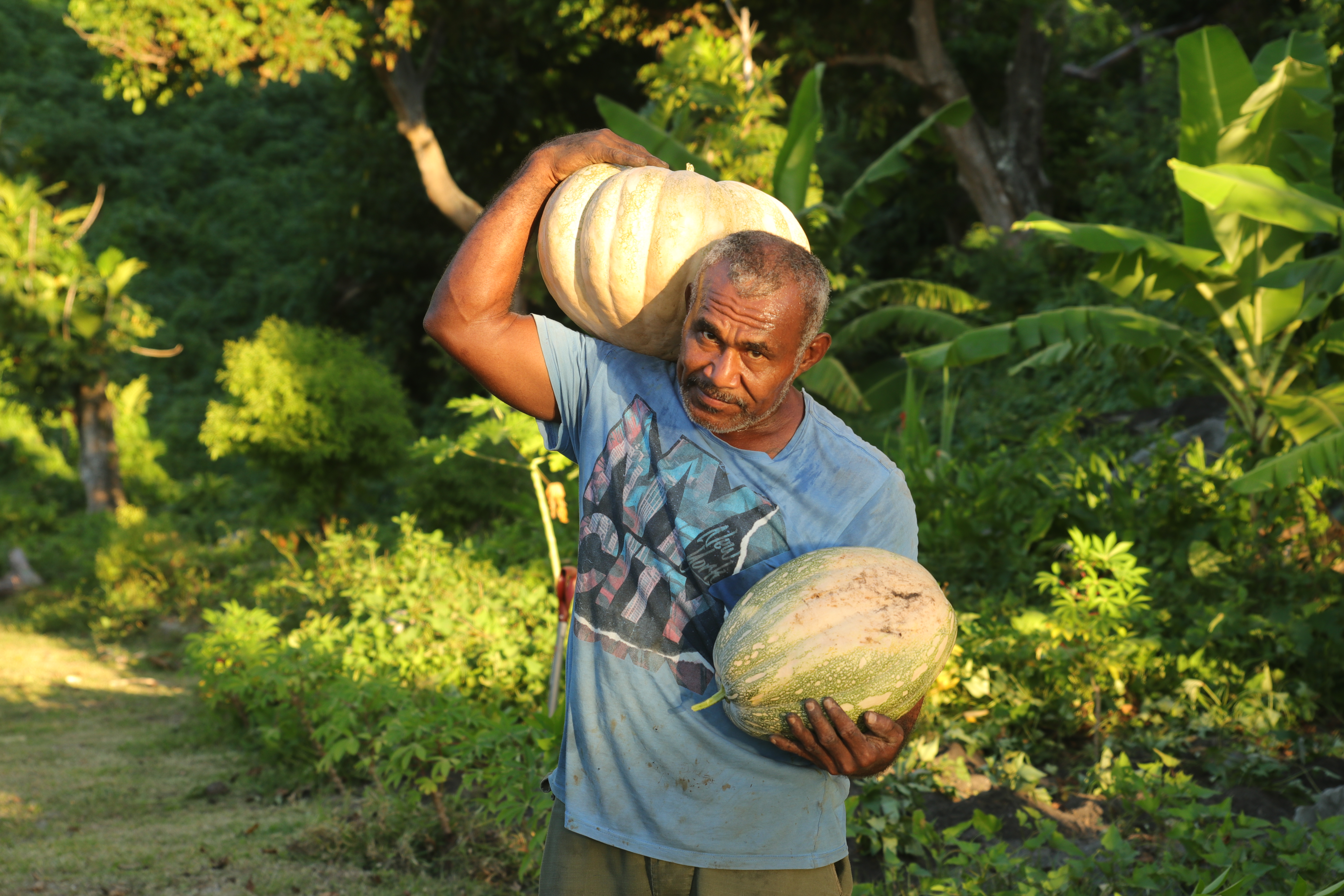 The locals garden for food and income.(Supplied: Ethan Gabriel)

The community relies on subsistence farming with some access to markets where they sell fresh produce and locally caught fish. This provides a limited income, but not enough for most to be able to afford to relocate their houses.

But despite the difficulties, active community member, 76-year-old Epi Cula has been encouraging the villagers to relocate and build away from the shoreline. 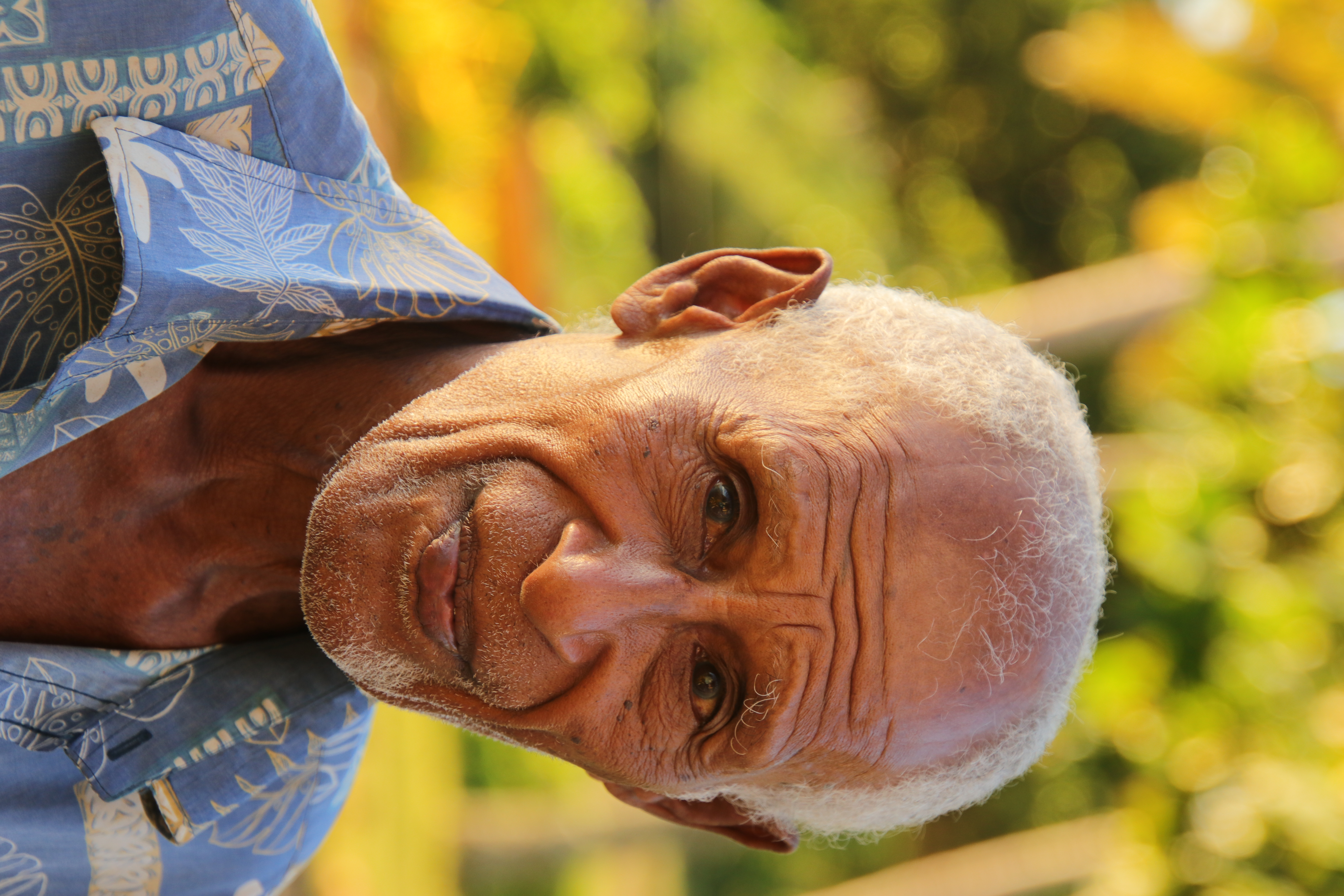 Epi Cula is advocating for Drue village to be moved to higher ground.(Supplied: Ethan Gabriel)

“We know very well the dangers of cyclones and how to prepare for them, however, we didn’t prepare well,” he says.

"Cyclones and sea level rise are coming; we need to be ready and to build our homes further inland; we need to move.

“We have already identified a place beside the old village site, if anyone wants to build, go build there. Our lives are in our own hands.”

In the meantime, the 2016 SPC report recommended villages focus on moving their evacuation centres and churches to higher ground, and planting vegetation along the shoreline as a temporary buffer against big storm surges.

Between a rock and a hard place

The main access to Drue village is via a path along the beach.

The pathway was built by a local hotel owner who had seen how hard it was for children to get to school and for the villagers to get to town over the steep cliffs that bookend the village.

But large waves during cyclones Keni and Harold dislodged rocks from the cliff face, sending them onto the path below.

This makes the journey to the coconut plantations or to the nearby resort where some of the women of Drue work, difficult.

In good weather, the primary school children from a nearby village catch a long-boat to school in Drue. But when the weather is bad or when the boat is busy, they have to use the increasingly dangerous pathway.

On foot it takes an hour and when the tide is high, the children must swim around the cliff.

The only other access around this point is by boat which is expensive, Mr Turabe says.

“We have five students that live in Naikorokoro village and one student that lives in Muaidule, that use this track frequently.

“This trail of rugged volcanic rocks is very slippery and steep; the children have to climb these rocks to get to the other side.

“Rising sea level has brought a lot of things that we did not see before - the waves breaking onto the side of the cliff are causing the rocks to break and fall and that’s a danger to the people that are using that point as a crossing.

Despite the hardships they face, the Drue people are full of determination and resilience, and still carry their trademark Fijian smiles.

The Drue Women’s Club meets weekly to discuss issues that affect their families and the village. The 26 women in the club say the two issues of greatest worry are the continuous disasters that strike the village and food security after disasters.

One key lesson they have learnt is how to be resilient during the cyclone season.

The women have been weaving mats, producing coconut virgin oil, and planting vegetables around their homes as access to the village farms has been destroyed by the cyclones.

This initiative has been successful in assisting the village, providing a second income for their families and putting food on the table, Drue Women's Club secretary Kaselia Marama says.

"Our farms have been destroyed, including our yaqona (kava), our main source of income. [So] we are trying new initiatives to help our families."

Yaqona plants take up to 5 years to mature. The frequency of disasters are now making this crop unsustainable.

"We have just been concentrating on "voivoi" or pandanus leaves to weave mats, as this was the only tree that was spared by the cyclone.

"The sea also provides us with fish that we sell at the Vunisea market, together with the vegetables that I plant around my house."

The club has embarked on a project to build an evacuation centre for the village. This project will also involve the Drue women living in Suva, Kaselia says.

"Women play an important role in supporting our households, families and communities. The Drue Women's Club is determined to work with our village committee to rebuild our village.

"We have a 5-year plan, and we will work with the relevant people, government, and NGOs to fulfil all that we have planned together.

"This is our village and our future, we have no other place to go. We are strong and resilient. Slow but sure, Drue will rise again." 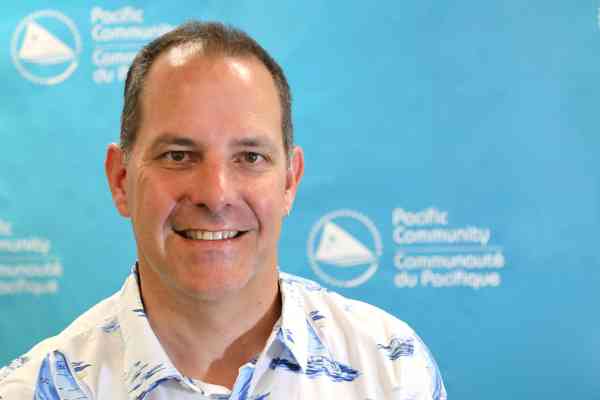 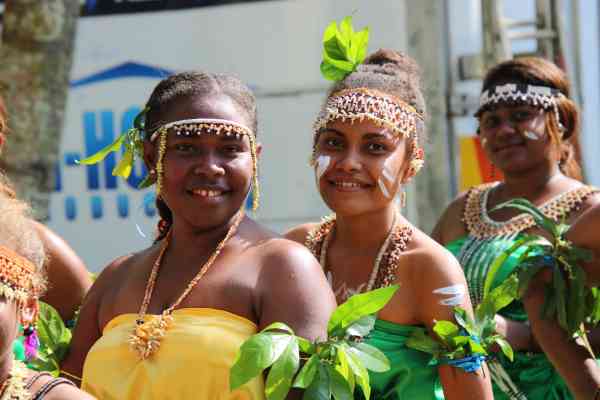 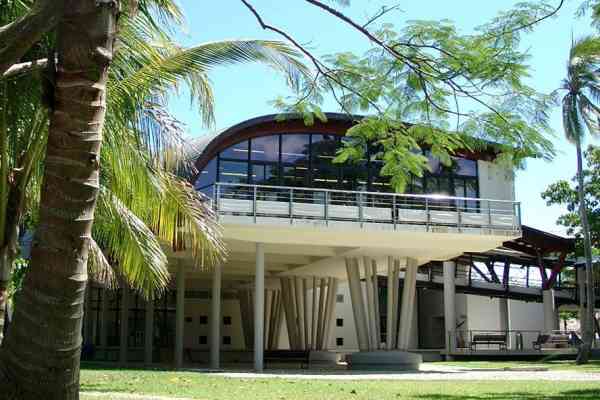