While crowds cheered on teams of athletes at the 9th Micronesia Games in Yap last month, another team made up of individuals from across the Pacific were quietly working to ensure that the health of both participants and the public was protected.

This dedicated team of health care workers was made up of experts from the Yap State Department of Health, the Pacific Community (SPC), the U.S. Centers for Disease Control and Prevention (CDC) and Federated States of Micronesia National Health Office.

One major public health concern managed by the team was a diarrhoea outbreak caused by the rotavirus, which had started in Yap a few weeks before the Games began. This could have been disastrous for the event, but thanks to the proactive measures taken in Yap the outbreak was mitigated.

Yap State Health Services Director and Medical Committee Co-Chair for the Micro Games Organizing Committee, Martina Reichhardt explained how her team prepared saying, ‘We were fortunate that SPC offered to assist us in the planning for mass gathering surveillance. They have an enormous wealth of experience and we were able to tap into this.  We were able to start the surveillance ahead of the Games and that is how we discovered the rotavirus outbreak. This gave us enough time to send out alerts and start responding to the outbreak to mitigate further spread especially to the incoming athletes and visitors. I believe this collaborative effort can be a good model for future mass gathering events in the region.’
Efforts to prevent infection conducted before, during and after the period of the Games included establishing hand washing stations at all venue areas, lodging sites and the village cafeteria; cleaning and sanitizing of high-traffic areas at all venues including transport services; environmental health inspections and implementation of mitigation efforts for identified deficits; and promotion of good hand washing and other healthy behaviours.

Enhanced surveillance started with the opening of the games. Each day, data was collected on ten syndromes (signs and symptoms of infectious diseases), such as diarrhoea or acute fever and rash, seen in patients from nine medical sites (the State hospital, five Community Health Center clinics and three mobile medical stations based at sport venues).
Of the 1,328 people who visited the health clinics in Yap proper from 15 to 29 July, 242 notifications (18%) had one or more syndromes under surveillance. Diarrhoea was the most common with 140 cases reported, followed by influenza-like illnesses (62 cases) and heat-related notifications (22 cases). Other than the syndromes, 136 injuries were notified and attended to by the health teams. Daily comprehensive reports were produced by the surveillance team, showing syndromes, diseases and sport injuries trends, as well as results from laboratory investigations and environmental health inspections.

‘Overall, I feel our team did well not only in our syndromic surveillance efforts but in sports injury response and provision of medical services. We are profoundly grateful to SPC, CDC and FSM National Health Department for their assistance with the mass gathering syndromic surveillance and the FSM National Olympic Committee and the Zhongshan Health Bureau for the sports medicine doctors and physiotherapists they sent us to assist in the field,’ said Director Reichhardt.

The positive results of health activities during these games will be studied closely so that the lessons learned can be shared for use in other large events organized in the Pacific.

SPC, in collaboration with regional partners, has provided support for enhanced surveillance for mass gatherings in the Pacific region since 2012. 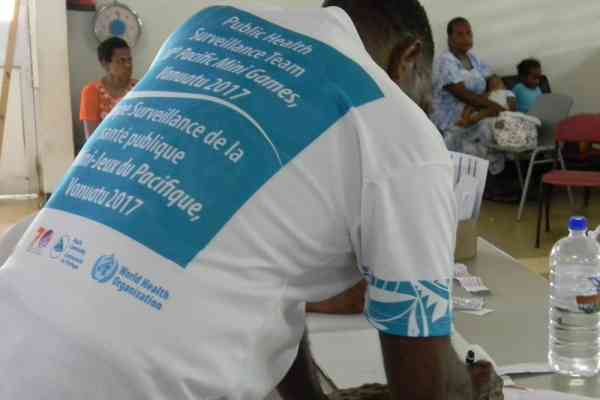