From 23 to 25 November 2022, participants from across the Pacific and around the world were gathered for the 52nd Meeting of the Committee of Representatives of Governments and Administrations (CRGA 52) and the Special thematic session of the 12th Conference of the Pacific Community (SPC).

The meeting, which was hosted by the Government of Vanuatu in Port Vila, marked a return to face-to-face sessions after 3 nearly years of COVID restrictions and was significant in being held outside of SPC’s Headquarters in Noumea, New Caledonia for the first time since 2016.

Key outcomes of the week’s discussions included the decision to locate SPC’s Polynesia Regional Office (PRO) in Tonga, members noting progress towards the implementation for SPC’s Strategic Plan 2022-2031, a recognition that the COVID-19 pandemic is still presenting challenges for the region and members highlighting SPC's Director-General, Dr. Stuart Minchin’s excellent stewardship of the organisation during the COVID-19 pandemic. Members also considered outcomes of a technical review of SPC undertaken by a Friends of the Chair Group, and agreed on ways to canvas implementation of recommendations in 2023, and within the context of the Review of the Regional Architecture.

CRGA 52 was chaired by Samoa, with Vanuatu hosting the 12th Conference under the theme, ‘Blue Pacific Prosperity and Wellbeing’. The Special Thematic Session of the 12th Conference began with a welcome ceremony at the Saralana Park in Port Vila where Vanuatu Prime Minister Hon. Alatoi Ishmael Kalsakau officially welcomed the delegates and opened the Conference. The traditional welcome comprised provincial dances, a feast ceremony, coconut planting by Heads of Delegations and kava ceremony.

At the event, in reference to the coconut planting and plague of coconut rhinoceros beetle, Hon. Alatoi Ishmael Kalsakau spoke of “the need for timely and targeted intervention by science in safeguarding important natural resources. Particularly, science that is not only practical and useful, but helps to safeguard our livelihoods and everything that sustains them”, he said. He also drew on the symbolism of the staff or walking stick to speak to the importance of leaning on one another and the resilience of the coconut tree—the tree of life—as a metaphor for Pacific peoples’ willingness to fight for their way of life and for seeking out and identifying new pathways to thrive.

This was followed by a featured session looking at the 75 years of service SPC has brought to the region which featured past and present SPC's Director-Generals. Prime Minister of Samoa Hon. Fiame Naomi Mataafa highlighted the Blue Pacific narrative and the need for Pacific leadership on climate change issues. Speaking of the Pacific led ‘1.5 to stay alive’ initiative she said, “I think we have to be diligent in keeping the international community to that…because fundamentally, the science says, if we go beyond 1.5 it won’t really matter how much money we will be throwing at things”.

The Special Thematic Session of the 12th Conference opened with the chair acknowledging that the day was also the start of the annual 16 days of activism to end violence against women campaign, with delegates wearing orange ribbons to signify their support to this global initiative.

Interventions were made by delegates on a range of issues, leading to lively discussions and debates. The urgency to address the impacts of climate change and the success of Pacific’s history of mutual cooperation, talanoa and collaboration were common themes throughout.

Tuvalu’s Permanent Secretary of the Ministry of Justice, Communication and Foreign Affairs, Dr. Tauisi Minute Taupo, acknowledged SPC’s work in maritime boundaries noting that Tuvalu “is facing sea level rise and it’s our membership of the Blue Pacific and SPC that is our strength”.

SPC's Director-General, Dr. Stuart Minchin spoke of SPC’s 75 years of history and the importance of taking a human-centered approach in the Pacific.  America Samoa’s Director, Department of Youth & Women’s Affairs, Ms Salote Aoelua-Fanene spoke of the country’s deep roots in the tradition of fishing and thanked SPC for continuing to provide ongoing support to the country, “it’s our way of life and survival”, she said, before highlighting Pacific Community “strengthening innovative commercial fishing opportunities with technical advice and training materials related to fish aggregating devices”.

Delegates were able to immerse themselves in SPC’s work during the’ Pacific Fair’ and ‘Science Showcase sessions which featured displays highlighting the impact of SPCs work in the region in Fisheries, Climate Change, Gender, Education, Public Health, Arts and Culture.

On the sidelines of the conference the European Union with representatives of  SPC and UN Women signed two partnerships with the Pacific, including EUR 8 million for phase 2 of the Pacific Partnership to End Violence Against Women and Girls Programme and EUR 1.5 million for the Pacific Solutions: Integrated Ocean Management (PSIOM), that will leverage the spate of national ocean policies (NOPs) launched in the Pacific in recent years and support a sustainable ocean economy that uses ocean resources in ways that preserve the health and resilience of marine ecosystems and improve livelihoods and jobs, balancing protection and production to achieve prosperity. 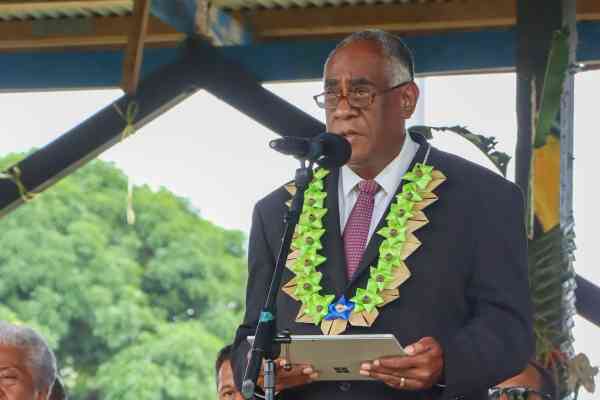 Official Statement by Hon. Alatoi Ishmael Kalsakau, Vanuatu Prime Minister, at the opening of the Special Thematic Session of the 12th Conference of SPC 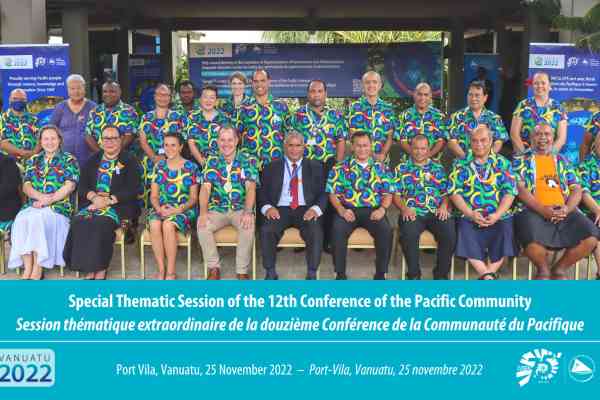