Pacific representatives called for a more inclusive voice as the world prepares for the upcoming UN Decade of Ocean Science for Sustainable Development 2021-2030. The call was made at the first of 9 regional preparatory workshops to determine the key priorities towards a more sustainable and healthier Ocean.

More than 70 representatives from the Pacific attended the workshop, which was hosted by the Pacific Community (SPC) in partnership with the Intergovernmental Oceanographic Commission (IOC), as an initiative of SPC’s Centre of Ocean Science (PCCOS). The workshop was funded by the New Zealand Government through the Ministry of Foreign Affairs and Trade (MFAT) with support from IOC.

Participants included Pacific government representatives, youth organisations, cultural specialists, business partners and regional agencies, who used the opportunity to emphasise the region’s leadership on oceans and call for strategies to increase understanding of our ocean at all levels, from global forums to local communities.

The workshop highlighted the need to include the voice of indigenous people and embed the existing traditional knowledge, culture and heritage that has allowed the Pacific Ocean to remain one of the most healthy and diverse in the world.

Dr. Frances Koya-Vaka'uta from the University of South Pacific, emphasized the important role of Pacific culture in the fight to save the oceans saying, “Because it's so critical to our very survival and livelihoods, it has to be in a language our people can connect with. That doesn't necessarily mean having to include Pacific words or language but seeing that you are represented and that your voices are reflected in the generic language and representation.”

This regional meeting will shape how Pacific priorities are embedded into the upcoming Ocean Science Decade, and ensure that the region has a strong voice in shaping approaches to reverse the devastating impacts being witnessed in our ocean.

SPC’s Director General, Dr Colin Tukuitonga underlined how ocean science must be both data driven and easily understandable saying: “The need for science to be inter-disciplinary, well understood and made more accessible to wider audiences, cannot be emphasised enough.” He stressed that, “technology must be harnessed to break down barriers and to enable people, communities and policy makers to access and make use of scientific data to better inform decision making at every level.”

Participants called for Pacific-led solutions, including mentoring young scientists so they can continue to be strong advocates for the ocean beyond the 2030 agenda. The need for investment in Pacific-led research to both increase technical capacity and increased understanding of how best to protect our ocean was also highlighted.

The workshop saw the partnership between SPC and IOC strengthened. A Letter of Intent was signed at the meeting to build on the existing partnership and ensure the Pacific will continue to be a leading global voice for ocean science.

To help with the visibility and advocacy efforts for this important meeting, the workshop also included representatives from 11 media agencies from across the region, who were given full access to the meeting sessions and participants. Over the course of the workshop more than 25 ocean stories were published and distributed. The media workshop was funded by the Australian funded Climate and Ocean Support Program for the Pacific (COSPPac). The full collection of stories can be accessed on the workshop website: https://www.spc.int/updates/blog/2019/07/the-science-we-need-for-the-ocean-we-want

The next regional workshop is due to take place from 31 July to 2 August in Tokyo, Japan. The Decade of Ocean Science officially begins in January 2021. 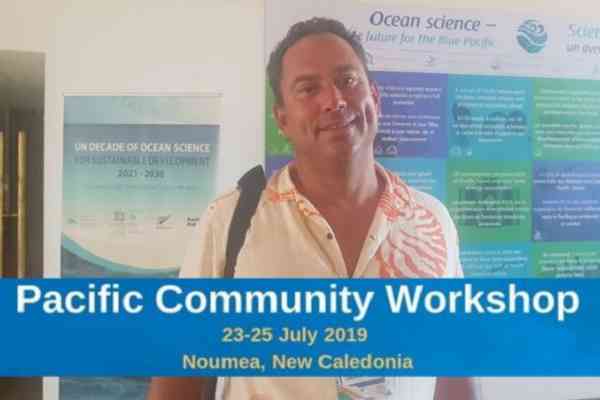 Blue Pledge to save our ocean